When we marvel at the skill of street photographers to extract from the chaotic mass of visual information that surrounds us, a spontaneous and magical moment of everyday life, that appears both organised and aesthetically appealing, it would seem, on the surface, that they are just blessed with good luck.

The truth however is somewhat different. I may not speak for the whole Street Photography community, but with many years’ experience of perfecting my craft, I feel fairly confident in asserting that getting a good picture does not result from just heading out the front door, wandering aimlessly and hoping to stumble upon some wonderful scene with humorous juxtapositions. Going with the flow is one thing, but preparation and anticipation is another.

We head to locations that we feel are going to provide us with photographic potential.
The American photographer, Gus Powell, expressed very clearly and interestingly this approach of finding a good spot in Nick Turpin’s in-sight Street photography short film.

“You start with what you know is not going to change & what stopped you in the first place when you walked the streets…..you get to understand the rhythm of that patch of land…you become a student and director of the pedestrian theatre at that spot”.

So what makes a good location?

The background for one. There is no one decisive definition of a good background, but I personally will look for a backdrop that is relatively clean, uncluttered, reasonably uniform and wherever possible with strong colour and interesting shape.

When I first chanced upon this richly painted green wall in London’s Soho in 2017, I knew it was just a matter of hanging around and waiting for the right scene to develop. Like placing figures onto a blank canvas. 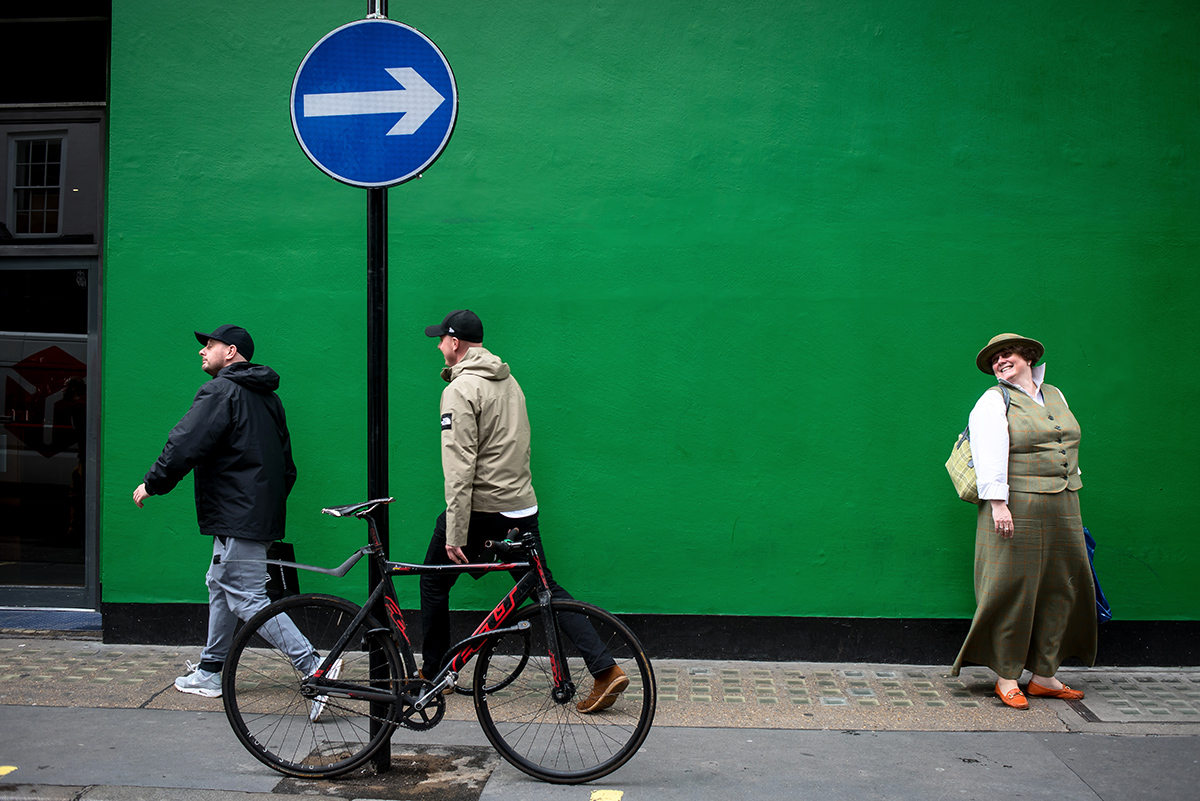 When I returned the following year with a Workshop group, I was pleasantly surprised to discover this rich coloured background still perfectly intact. 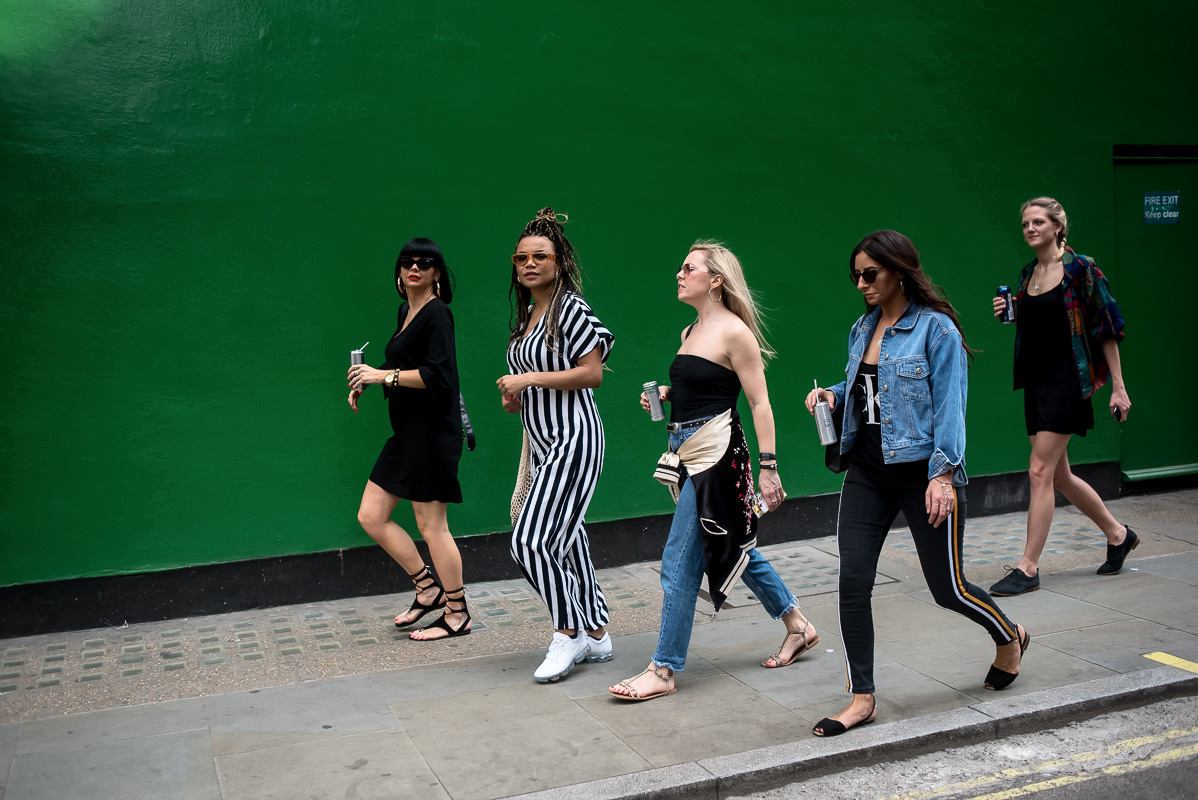 Not far away along Oxford Street, another good coloured background attracted my eye, this time a blue one. The metallic structure with it’s strong vertical lines adds a supplementary graphic element, which helps in composing the frame. 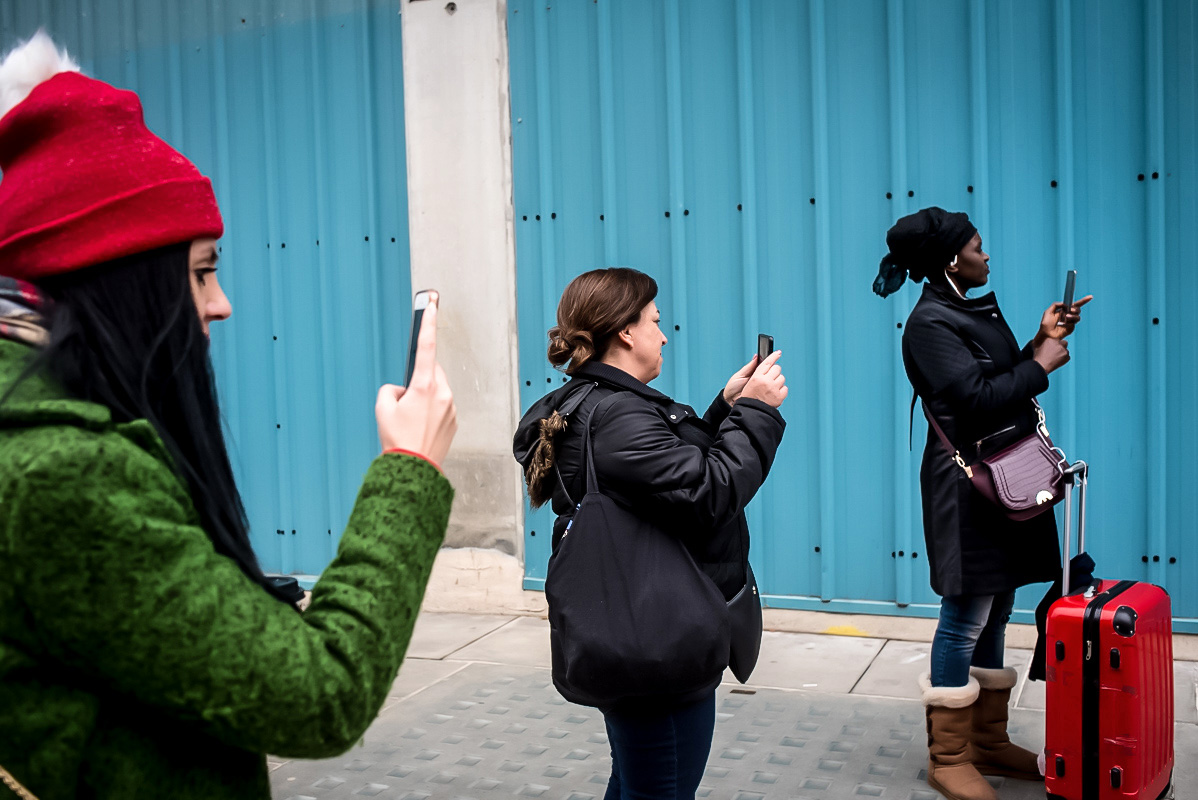 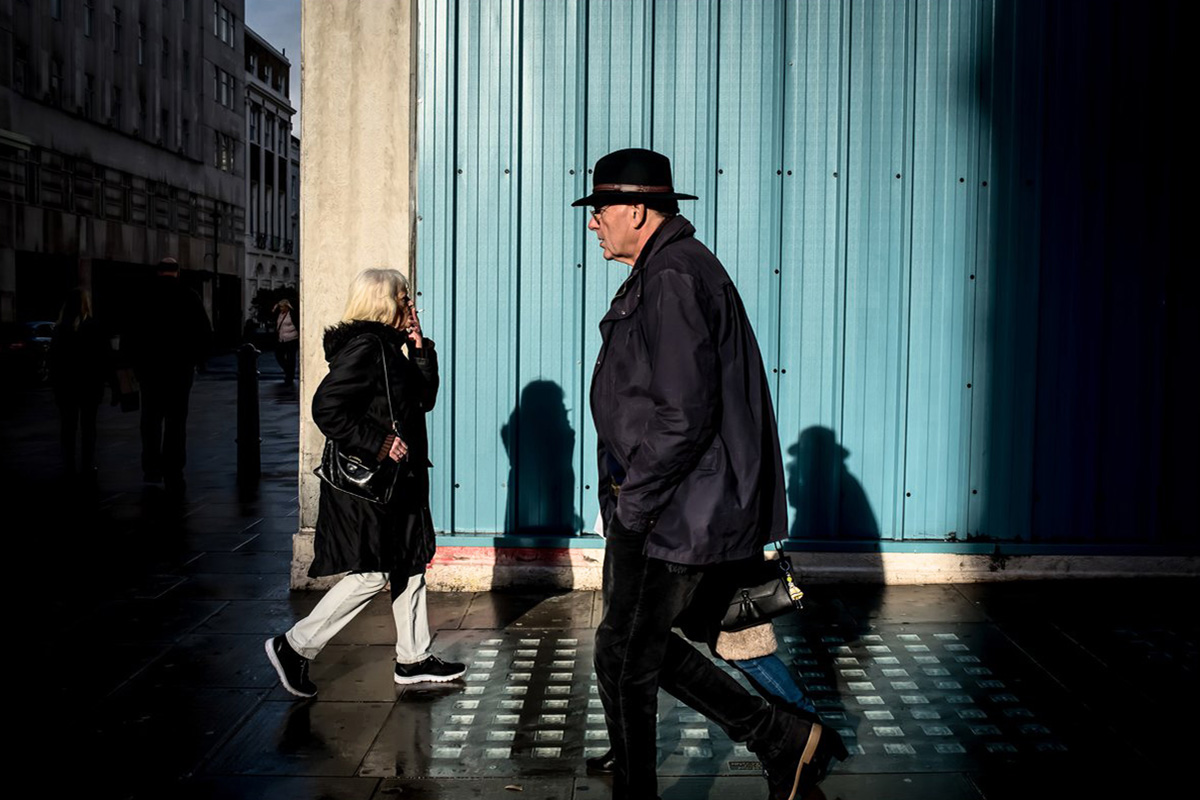 Matt Stuart, who has made Oxford Street his personal hunting ground, also chose this spot to capture a recent moment of pure street theatre.

Strong, well defined architectural structure, the repetition of lines and shapes was also the inspiration, or at least starting point for this more fluid image taken at Bank, in London. 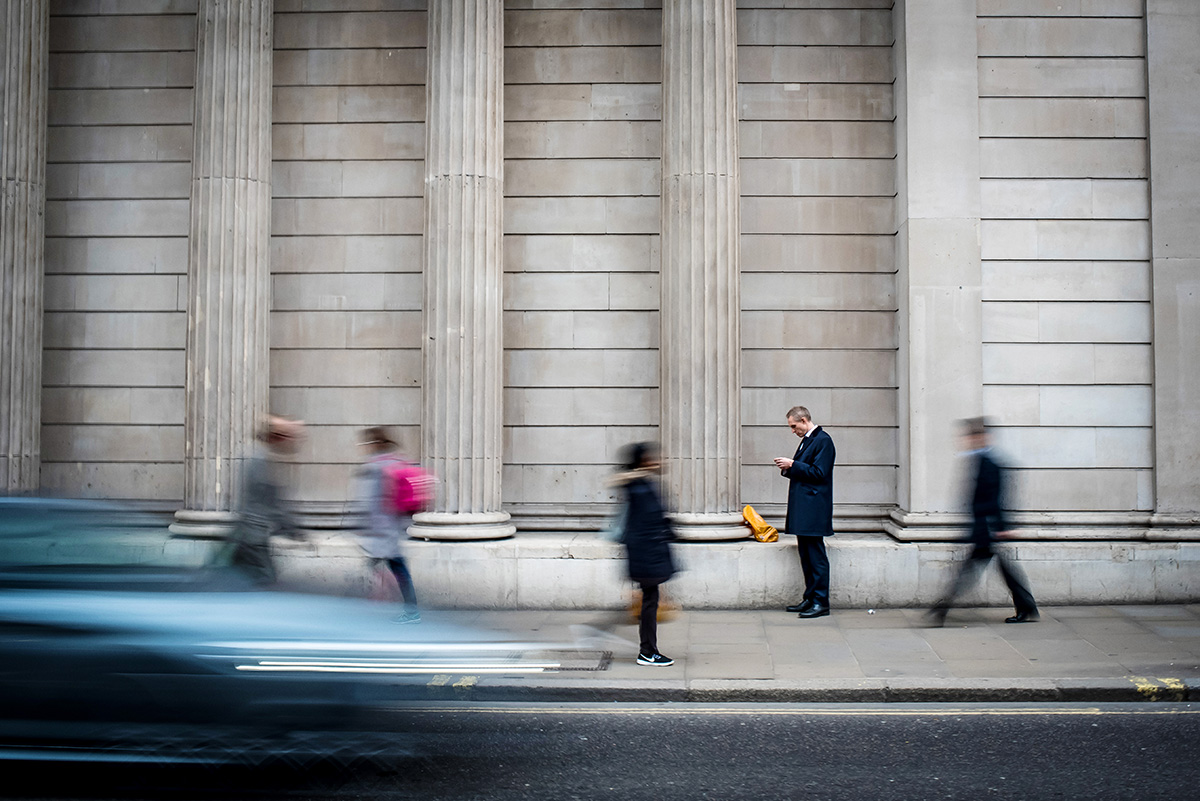 Another location, this time in Nantes, that I am often drawn to, is the “marches de la fierté” staircase in the centre of town. Painted in the rainbow theme of the LGBT community, the colour is one attraction, but it is more the ability to create geometric games around the movement of the passers-by heading both up and down this walkway that make it a fertile spot for my style of street photography. 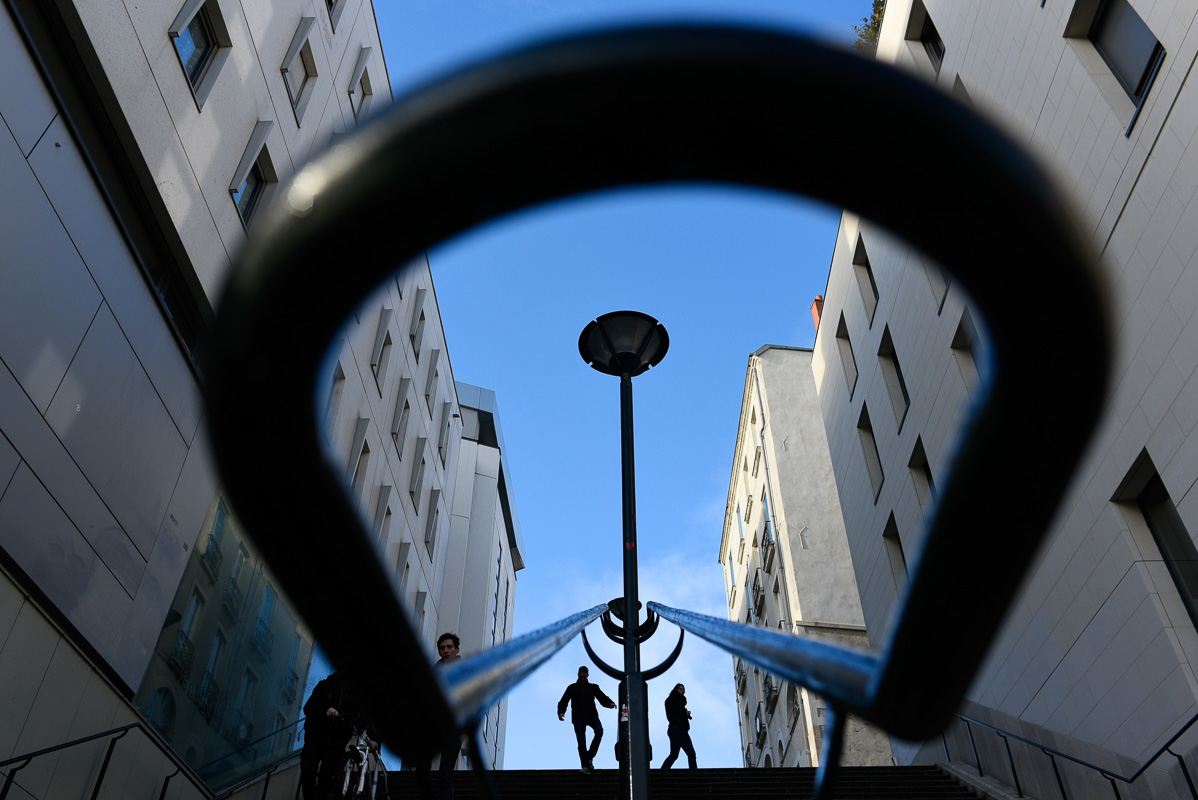 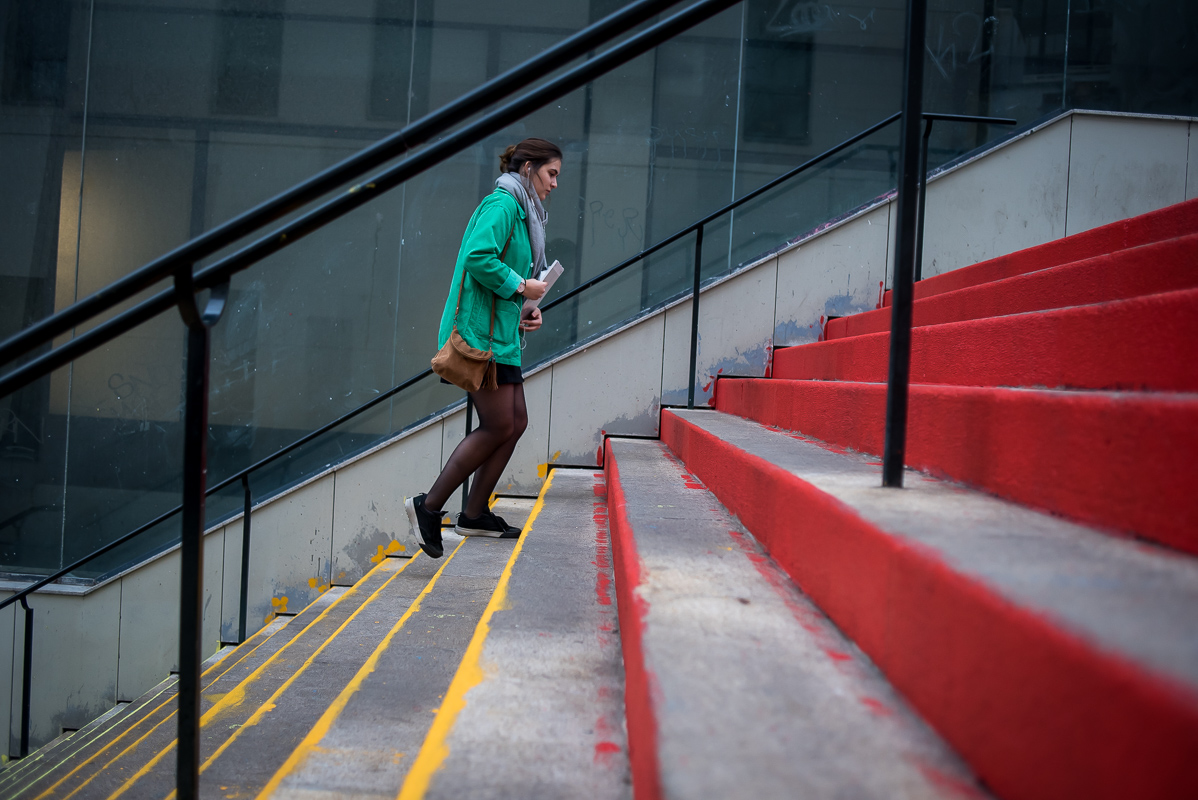 Good vantage points that offer original and unusual perspectives can also provide prime locations for capturing the flux of urban life in eye-catching ways. The modern shopping centre across from St.Paul’s in London, with it’s overhead views and high glass content, allows one to create interesting reflections and play with patterns, in a way that is more abstract than street level photography. 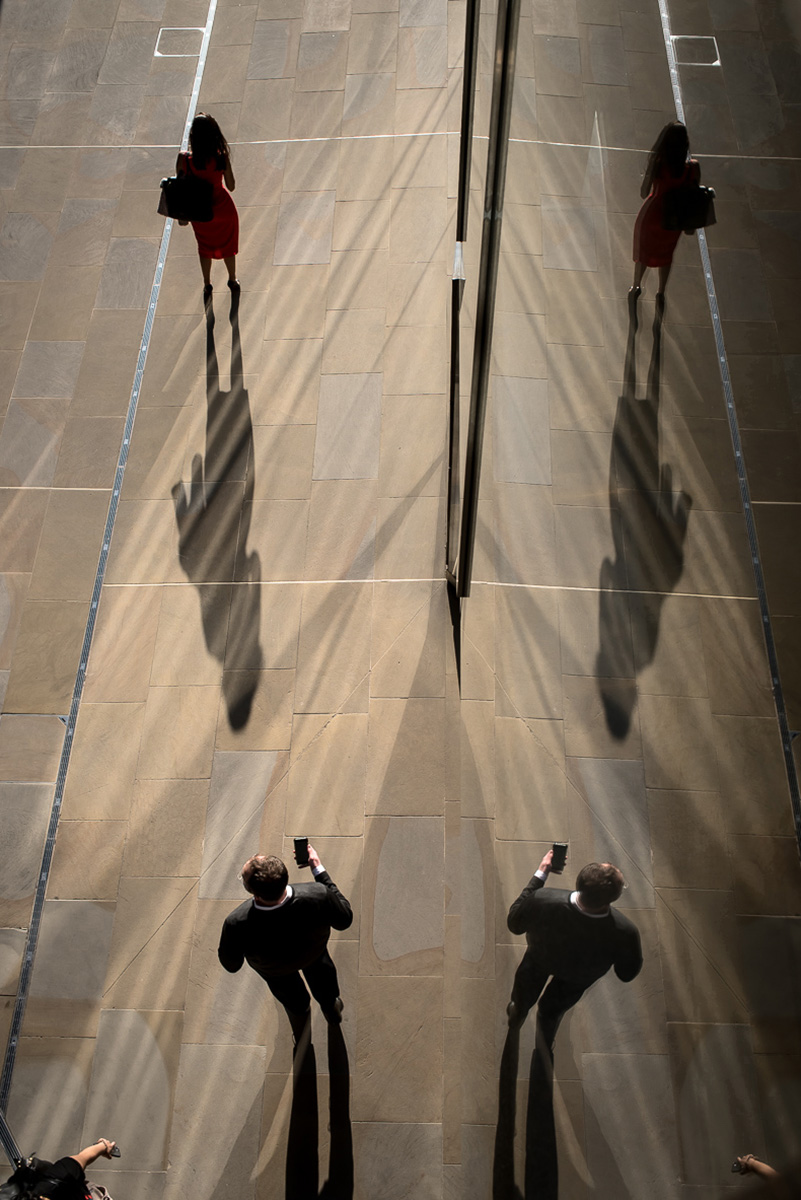 It also goes without saying that having great light is a boon to any photographer, street shooter or otherwise. Once you’ve pounded the streets of any town for many days, and over the course of different times of the year, you begin to develop a good understanding of how the light falls in a variety of locations and when the conditions are at their most optimal. In Nantes, I have become increasingly aware of the dramatic light that visits the Rue Crébillon on late afternoons, as the sun lowers along a direct east-west axis. The direction and intensity of the light, creates amazing contrast and shadow effects, and I have endeavoured to exploit this as creatively as possible. 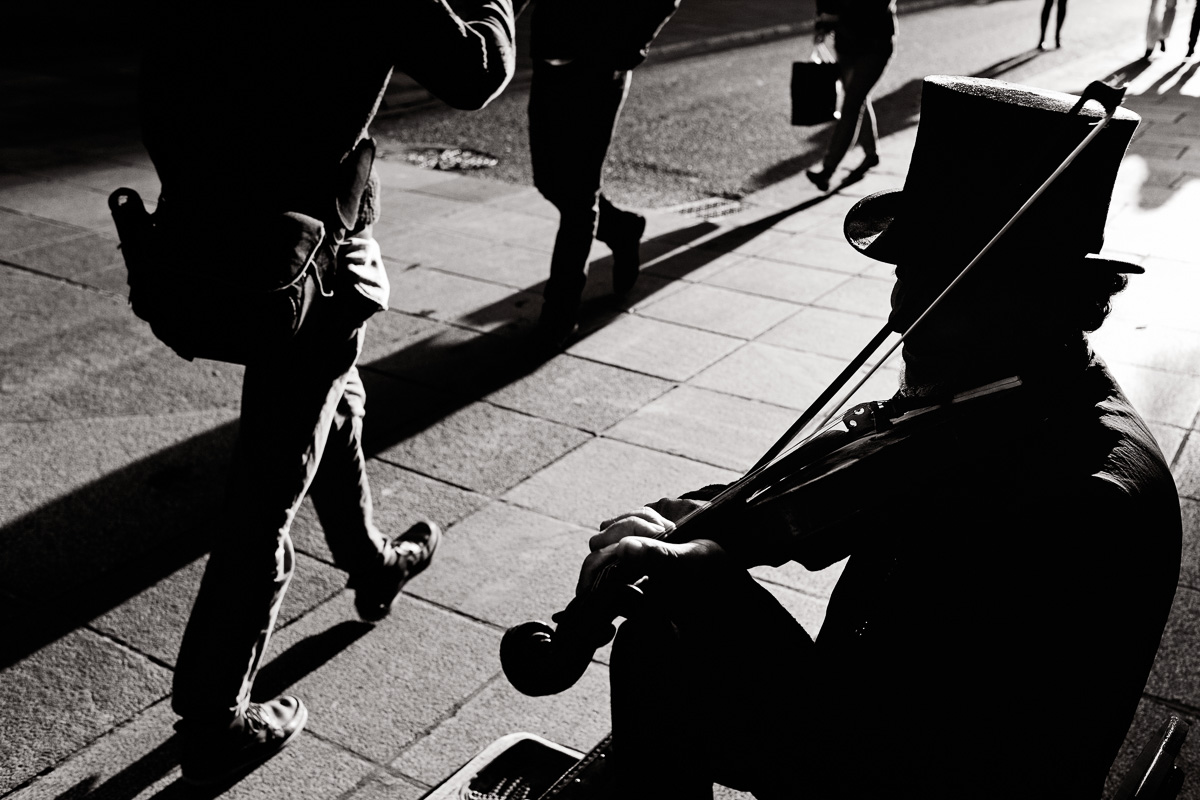 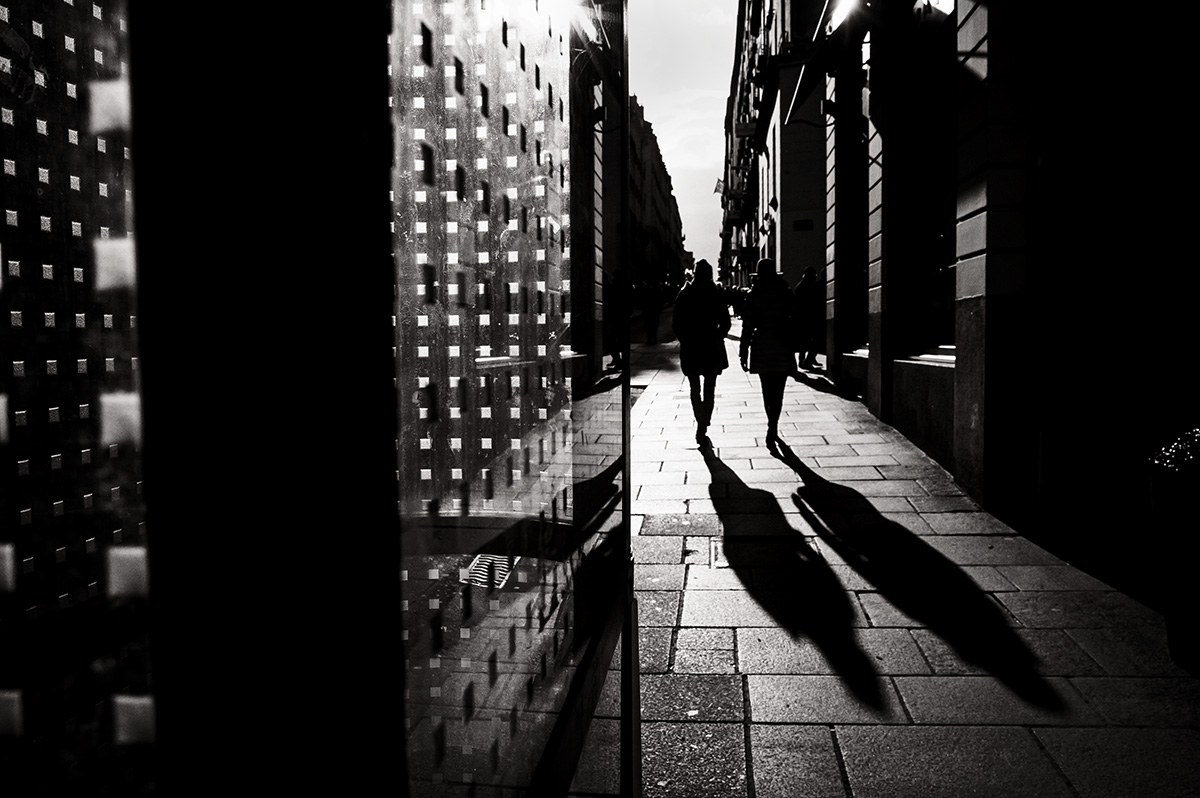