You don’t have to be Jewish to be a Photographer

But sometimes it helps, as I will try to explain !

Towards the end of last year I was invited to contribute to a French podcast called “Les passeurs des clés”, where writer and journalist Cyril Lichan interviews a broad range of people, from cooks and musicians, to sportspeople and soldiers, encouraging them to pass on some key life lessons to the listening public. The photography slot is a small interlude in this programme and I was requested to choose my all-time favourite picture that he would present to his next guest. Picking one image over 30 years of work is a daunting task, but fairly quickly I selected the photograph below, which has in many ways established itself as my signature shot. 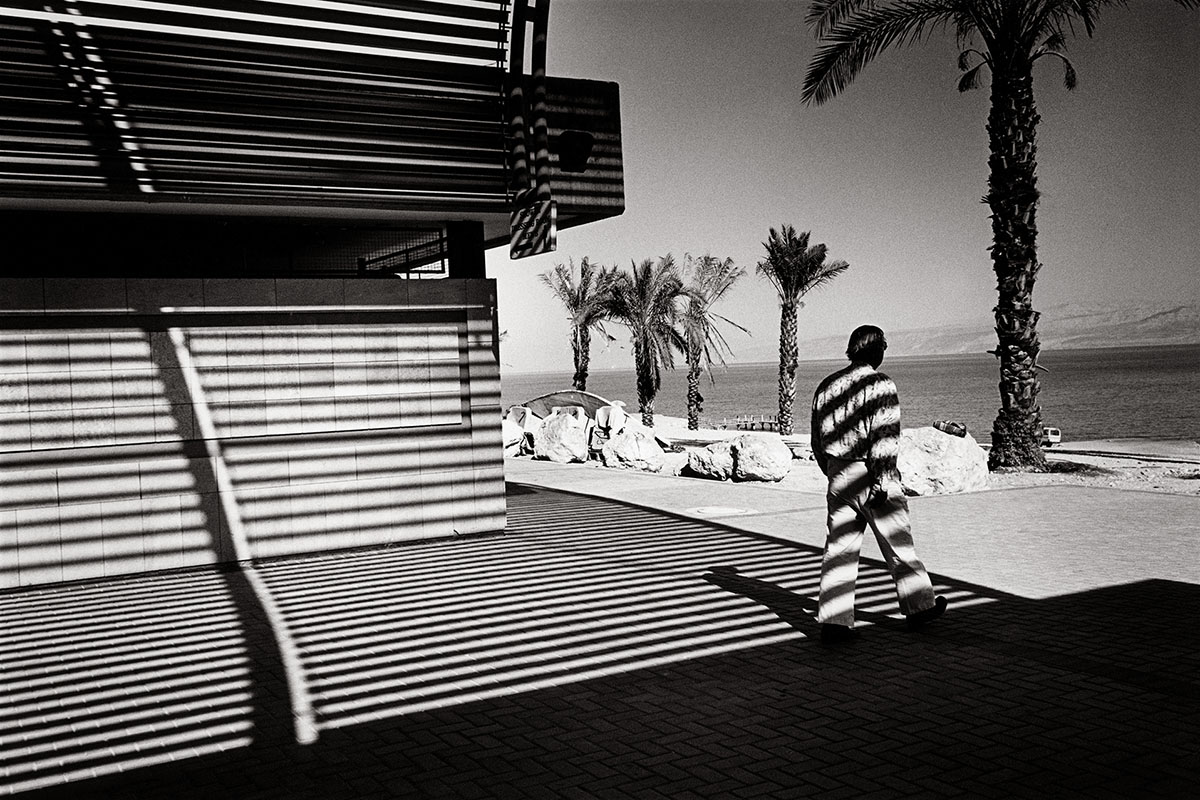 From a photographic viewpoint it ticks the right boxes- good light, high contrast, geometric shapes, a sense of mystery, a touch of humour- a balancing act of tension and peacefulness, captured within the four corners of my Leica film camera, a true Cartier-Bresson ” decisive moment” ! But maybe more importantly, from a personal standpoint, it ticks other key boxes. This image was taken by the Dead Sea, on my first trip to Israel. That trip was both a holiday and a voyage to discover more about my Jewish roots, a sense of connecting with a deeper identity. Though I’m not religious, it was difficult not to feel some special resonance at a site of such geographical, historical and biblical importance.

Although I was in no way pre-destined to become a photographer, from where I stand today, it seems almost self-evident that this became my chosen profession. The desire to capture reality in a way that transforms that reality and offers some new angle on our everyday surroundings, requires a degree of perception that is different from the “norm“, a way of seeing “outside the box”.  As a nomadic race, it appears to be part of the Jewish psyche, to never truly belong to a particular place or time, to always view life, from somewhere external.

Back in 2007, the BBC produced an inspiring and thought-provoking series of programmes called “The Genius of Photography”.  In one of the episodes I discovered the wonderful photographs of Jewish photographer Larry Sultan (now very sadly departed), with particular focus on his family based-work, entitled “Pictures from Home”.

Although he was documenting a subject with which he was intimately connected,  Sultan explains in the programme how the photographer’s role is always to remain, to some extent, outside the situation. ” The daily practice of being a photographer is being distanced, to have a little bit of room between what you’re doing and how you see”.

Aside from the brilliant treatment of light and colour, it is his ability to be both part of the scene and an impartial observer which gives the pictures such depth and weight.  The boundary between what is staged and what is spontaneous becomes less clear and lends these images their special photographic quality.

While his father got fed up posing and sat down to watch the baseball game, his mother remained planted against the wall, her gaze transfixed by the camera. She is said to have remarked  ” I don’t mind how I look as long as it makes you successful”, to which Sultan drily retorts ” that’s such a Jewish mother thing to say !”

A sense of humour

This ability to make fun of oneself, often used as a self-defence mechanism to send up certain stereotypes, such as the desire to make money at all costs, is very definitely entrenched in Jewish culture.

I was brought up on the gags of the Marx Brothers, Woody Allen and Jackie Mason – their capacity to undermine authority with sharp one-liners, speaking up for the underdog. Their expression of a world view that encompassed both tragedy and comedy, often at the same moment, was definitely embedded in my DNA.

When I first got into photography, I was amazed to find out that you could also tell jokes through images. Elliott Erwitt’s “Personal Exposures” was one of the first books I bought.

There was no artifice to his pictures, just wonderful moments of real life, captured with a highly-trained eye. A sense of framing and juxtaposition that brought a smile to the face.

I have always been inspired by his pictures, and it is particularly evident in some of my early black and white street photography, that I was consciously aiming for visual puns à la Erwitt. 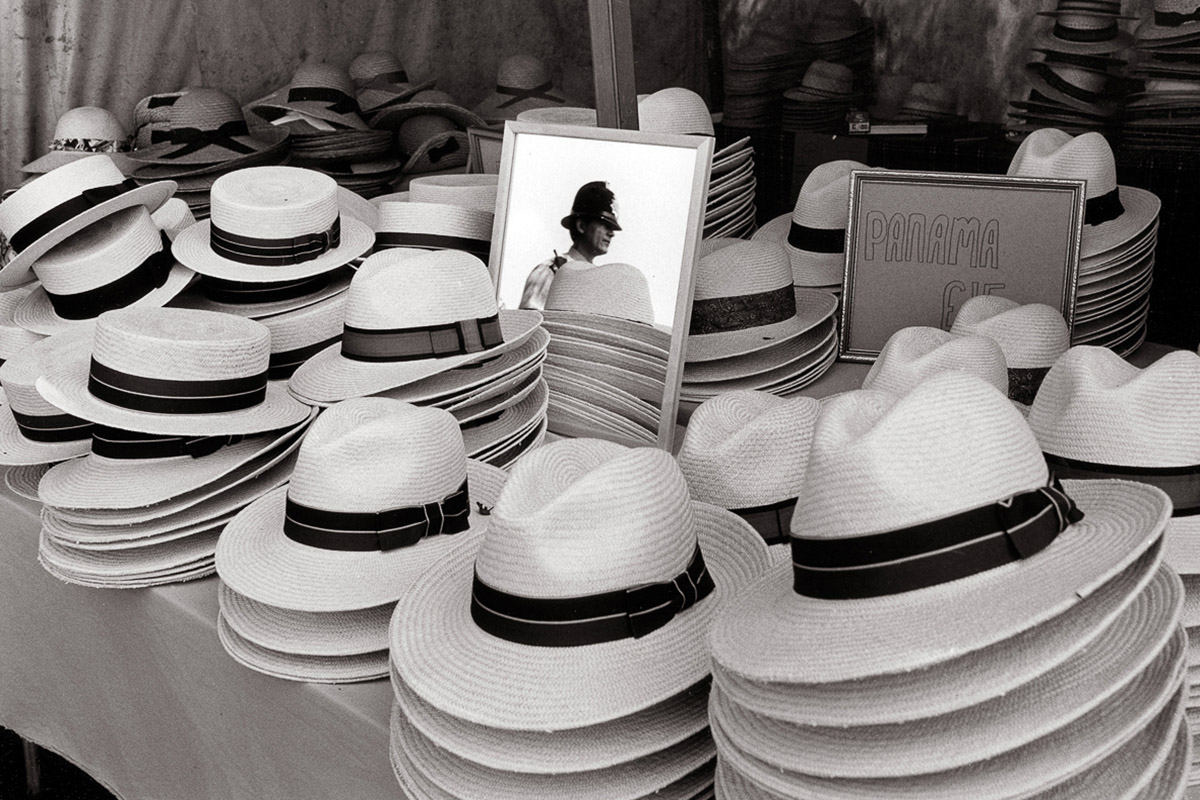 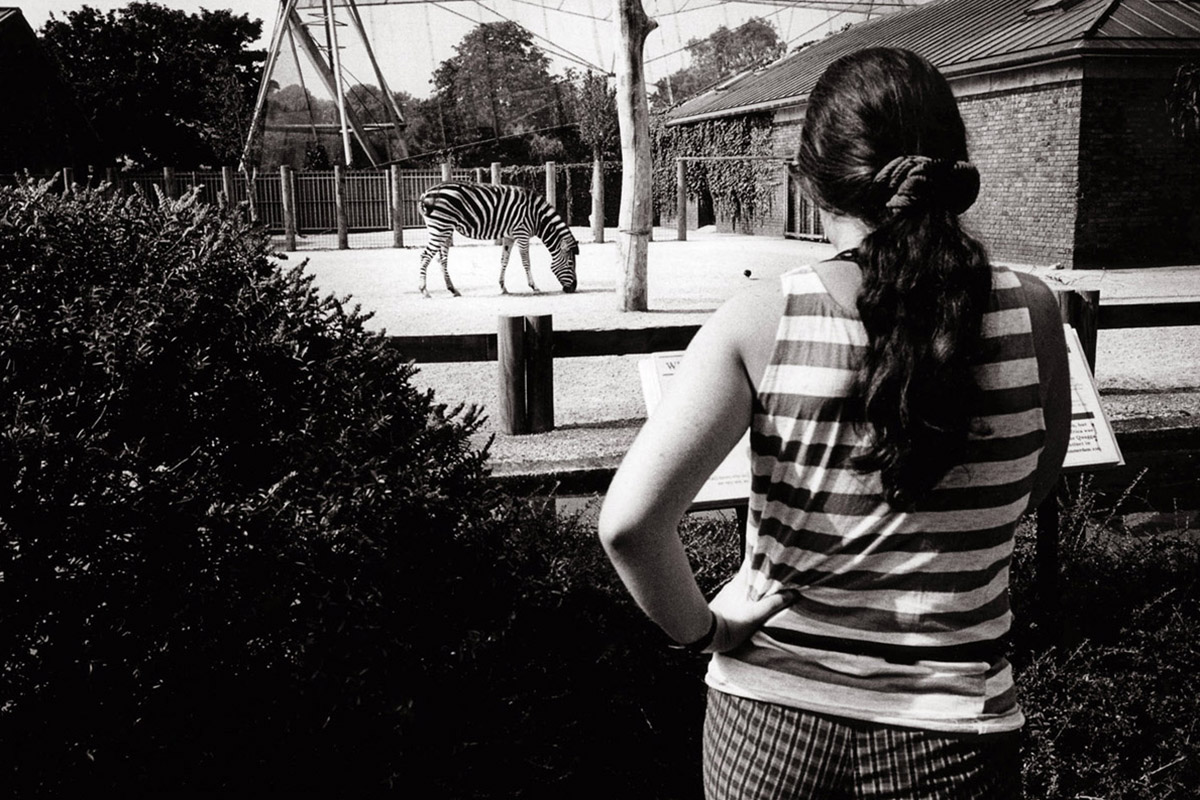 I was even influenced by his photographs of dogs ! 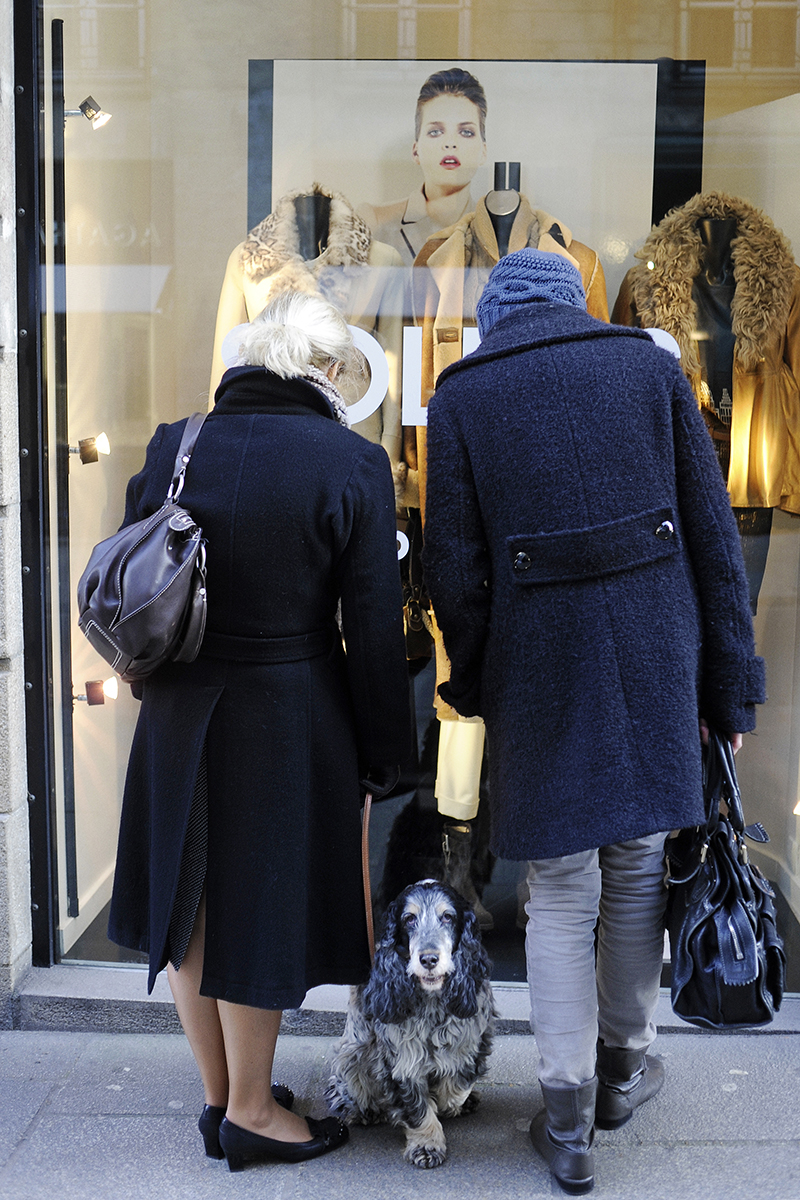 It may be true to say, that trying to be funny through pictures is a way of courting popularity and attention, which as a naturally shy person I found difficult to attain by more conventional means.

Certainly the cliché about Jewish humour is that it defines a people who rely on showcasing their intellectual skills to make up for shortcomings in manual work or other forms of physical prowess.

What’s in a name?

Although I was “christened” Timothy at birth, from my teenage years onwards I became Tim. Having the name Tim Fox, has no doubt helped my career in certain ways. Not least, here in France, where several times over the last 20 years, I have been asked whether it is my real name or my “artist’s name “!  It’s true to say that its easy to retain and has a punchy ring to it. On the other hand nobody would surmise just from my name, that I am Jewish. My father, a refugee to the UK from Berlin in 1939, and from eastern European descent, had the surname Kvasces. Then on British naturalisation and to make professional life in his new country easier, he adopted the anglicised version of his mother’s maiden name.

My situation draws parallels with several notable Jewish photographers, whose names became altered to help assimilation and avoid overt or underlying anti-semitism in their adopted countries. The two most famous examples are Robert Capa and Man Ray.

The former, born in 1913 in Budapest under the name Endre Ernő Friedmann, adopted his pseudonym in Paris in the mid 1930’s, firstly in conjunction with his girlfriend and fellow photojournalist Gerda Pohorylle, and then soon after in his own right. Apparently Robert Capa was chosen because it sounded American. The use of an alias fitted well with a risk-taking, flamboyant photographer who enjoyed mixing with the Hollywood stars as much as heading to the latest war-zone.

Man Ray was born in Pennsylvania in 1890 under the name Emmanuel Radnitzky. Although the name change originally stemmed from the family’ s desire to avoid discrimination in turn of the century America, the photographer artist assumed his new identity as part of his revolutionary, libertarian spirit. The two short striking syllables of his name, associated with universal humanity and light, bestowed upon him the freedom to pursue the creative life that he set out to pursue on his arrival in Paris in the early 1920’s. More than just a name, adopting the identity of Man Ray became the symbol of avant-gardism, a desire to experiment and redefine the possibilities of the photographic medium. It was a trademark in much the same way as the portrait photographer Félix Tournachon had assumed a few decades earlier, under the title of Nadar. Indeed, so entwined did he become with his artistic persona, that he refused to acknowledge that he had ever had another name.  Moreover in keeping with the Jewish identity as the “outsider”, Philippe Sers comments in a book of Ray’s photographs,  ” he managed to remain a foreigner all his life, both in America, where he was born, and in France, where he died. He was extremely comfortable in this role“.

The weight of history

Apart from the two examples cited above, the list of famous Jewish photographers, reads almost like the list of famous photographers, especially American ones of the last century. Arbus, Winogrand, Frank, Leibovitz, Avedon, Levitt, Penn, Newton, Klein, Leiter, Strand, Ellen Mark, Haas, Stieglitz, Eisenstadt, Sherman, Meyerowitz, Weegee….and it goes on.  In no way do I wish to make any claims about “the chosen people” or some intrinsic Jewish talent, but the link surely cannot be just coincidental. What drove all those men and women, within their different specialities, to wish to record the world around them on a small strip of gelatin emulsion containing silver halide crystals?

As mentioned above, the Jewish identity as the “outsider”  has in my opinion played a significant role. These figures have all been artists who specialise in “observing”, deciding to what extent they belong to the community in which they live, and to what extent they remain foreign.

While some of those cited pre-date the Second World War, the impact and scars of the Holocaust certainly contributed either consciously or unconsciously to the growing link between Jewishness and Photography. With such horrors committed in darkness, hidden from the outside world, it became necessary to go out again and make a visual document of daily life: a testimony to the value of each individual story and a means of transmission to future generations.

I can state from personal experience that while for many years I was desperate to fit into the crowd, though I never suffered from any real discrimination, accepting my Jewishness has allowed me today to be proud of my difference and fired my artistic instincts. I do not wish to take pictures that look like everybody else’s; I always to strive to capture a moment, create an aesthetic that is my unique viewpoint.

The traumas and upheavals suffered by my parents 80 years ago has no doubt left me with certain insecurities. But it has also given me an inner strength. A will to right certain wrongs. A drive to prove myself, work hard and show that I have something valuable to express.  I thank them for their love, their sacrifices and their willingness to give me that freedom. 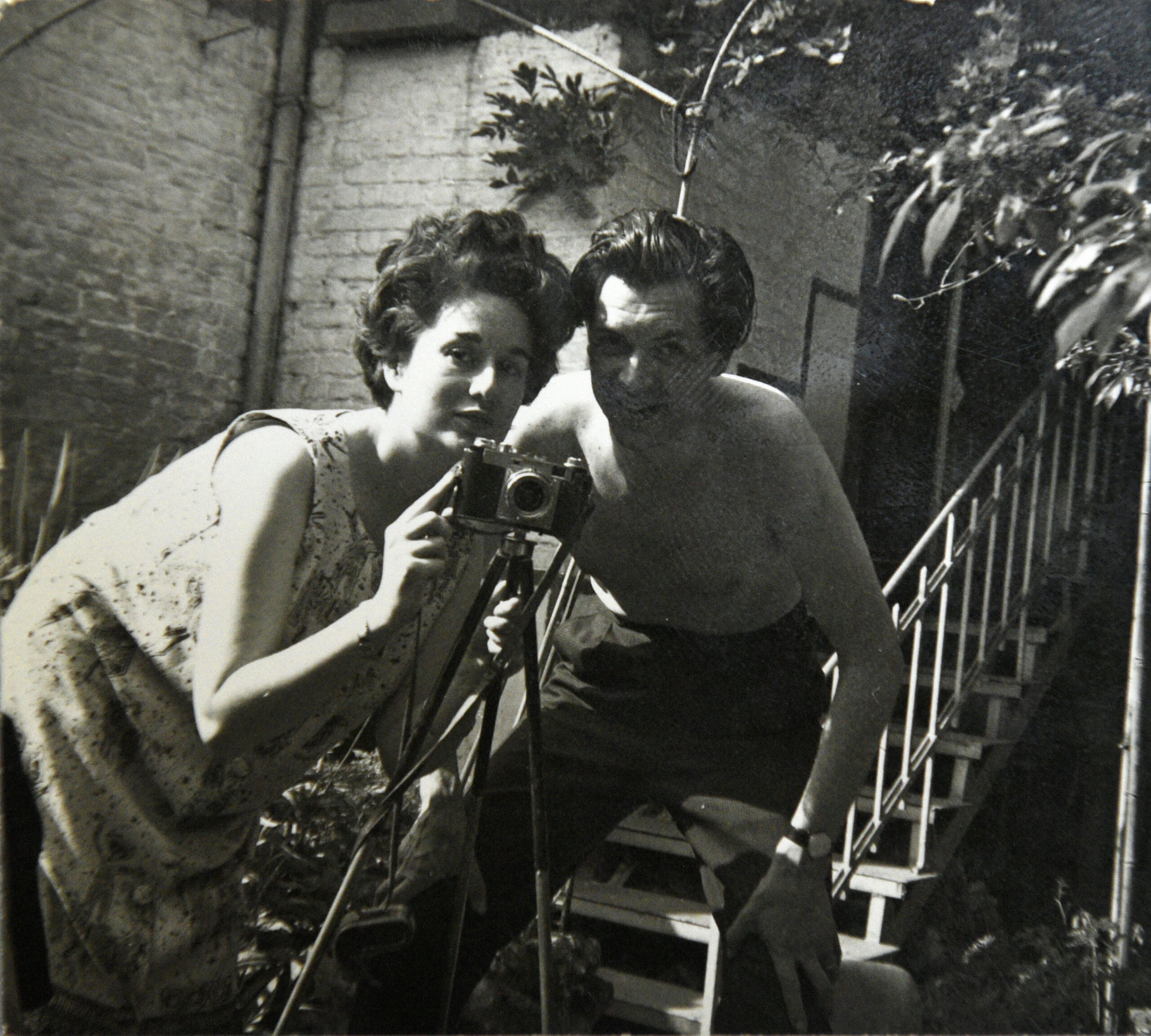