For the majority of Street Photographers, the act of going out into the urban environment, hoping to create something out of nothing, capturing a visual moment that only exists because we see it at that particular time, in that particular way, can often feel akin to a sense of enlightenment, an almost spiritual-like experience. Cartier-Bresson, influenced by Buddhist and Zen philosophy, was one of the first to express the photographic process in this way, the camera being an instrument of intuition and spontaneity.

In modern parlance, we refer to being in the moment, in the zone. At such times our perceptions are truly heightened, we are fully in tune with our surroundings and we can suddenly order the chaos in magical and often beautiful ways.
Being alone seems an almost prerequisite for this process, how else can we be totally concentrated, immune from distractions?
Is Street Photography then necessarily a solitary occupation? I certainly used to think so.
Apart from the existential pleasure of wandering the streets by myself, in my own space and rhythm, I firmly believed that I could only be creative in this way. 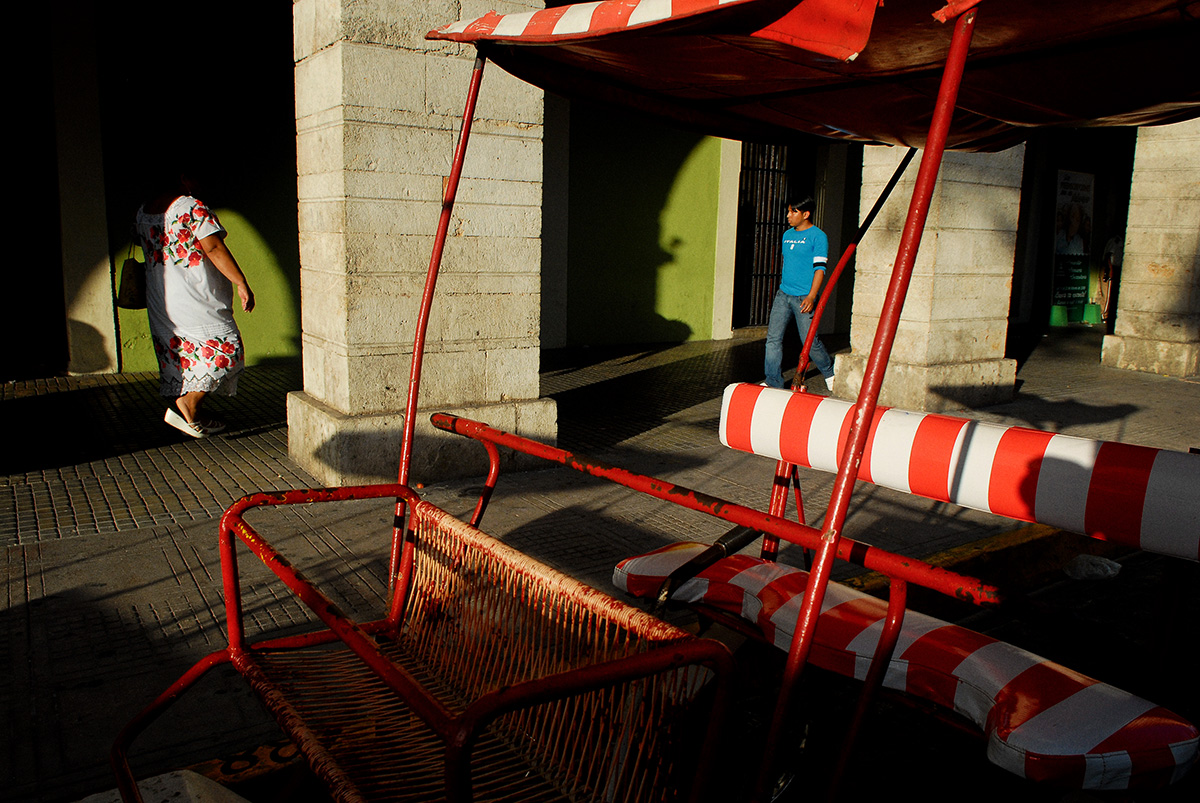 However, when I started to run Street Photography courses and workshops, I realised it was not enough just to leave the participants to their own devices and encourage them to be more visually aware and get in the zone. You often had to accompany them; explain and try to show in concrete terms the mechanics of shooting on the streets – finding a good location, choosing the point of view, waiting for someone to pass, working the scene etc. 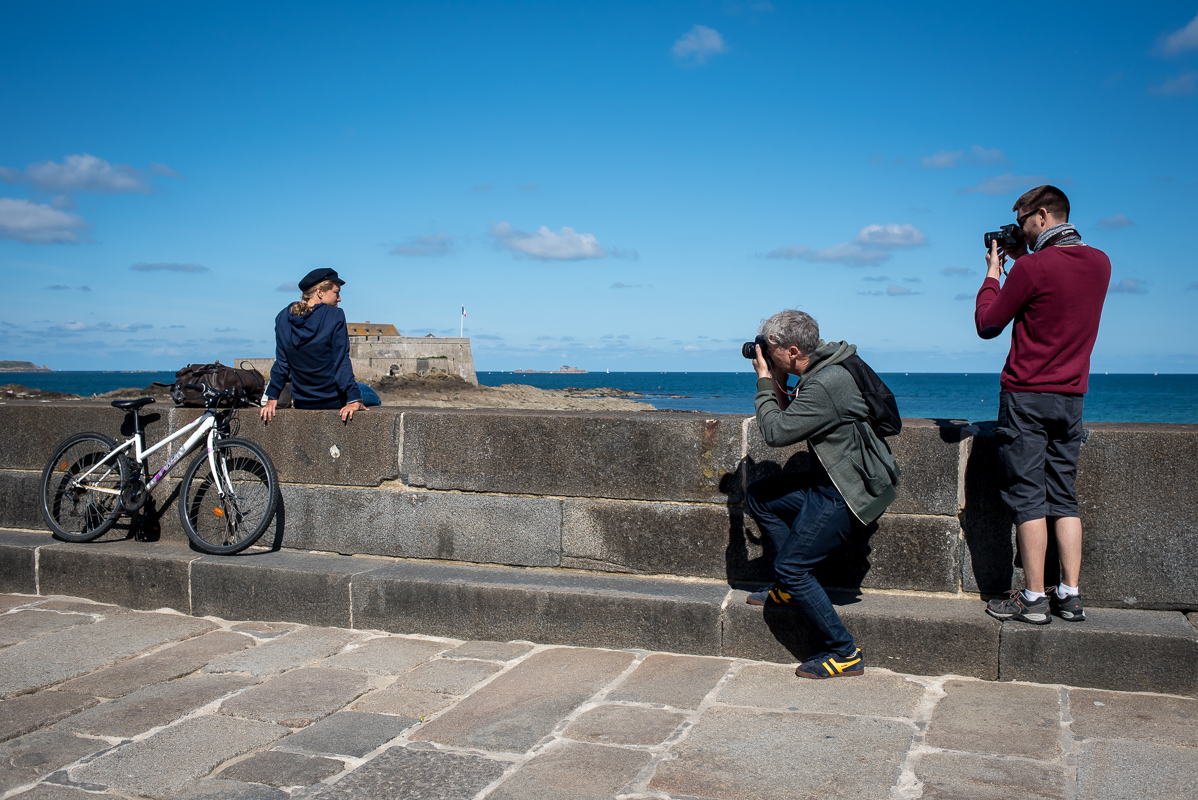 Thus I started to experience Street Photography in a new light, shooting alongside others, and realized that it often had quite beneficial results. In a group situation I can feel less inhibited, more able to shoot strangers than if I was on my own. As a group you are often perceived as an innocent bunch of nerds grappling with technical matters, rather than as a lone stalker hunting prey. It can also make me more determined to get a decent shot, knowing that I need to show my students that I’m capable of practising what I preach.
The image below, taken on my London workshop is one example of where the group situation acted in my favour. Normally I’m endeavouring to capture people’s expressions without them knowing. But here the passer-by waving at me and interacting with the group as a whole, actually creates a more engaging image than would otherwise be the case. 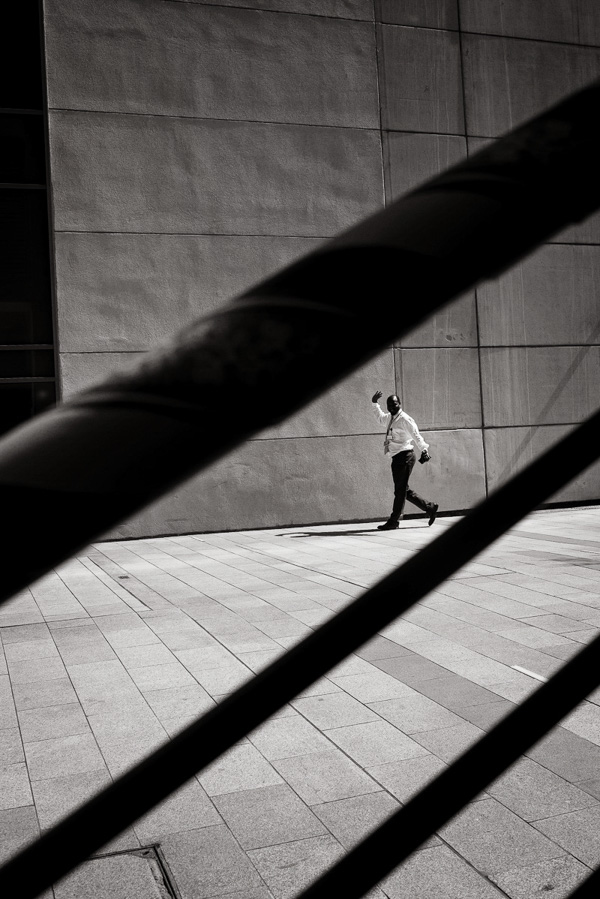 I was keen to reach out to the wider Street Photography community and find out how others felt about shooting with others. Most came back with similar answers but there were nuances. Matt Stuart, confirms the prevailing opinion that generally it is distracting, though confessing that it can occasionally provide a bit of Dutch courage. The following image was taken while out shooting with Joel Meyerowitz and Gus Powell in the Big Apple.

“To be honest I was the only one that saw this. The shadow fell perfectly onto the guy’s face. I didn’t hesitate to lift my camera and photograph him, although I did have a slight fear of the fact that the subject matter was a cop! I clicked of two or three frames and walked away, he didn’t say a thing or react in anyway. Had he reacted I would have put on my best English tourist accent and hopefully gonna about my way!”

Pleasantries aside, safety is an important consideration for any Street Photographer, often more so for women, but as Stan de Zoysa points out, even for guys, “ there are neighbourhoods (let’s not name names) in which one shouldn’t shoot alone.”

While for Cédric Roux the risk of being with another photographer is that you get in each other’s way, as you tend to see the same things , for Polly Rusyn there can be gains to be made hitting the streets with a non-shooter.  “I have an annual jolly with my best mate and she’s not a photographer, but she gets me and is super laid back. And we walk, chat and I shoot. She acts as a very good wing woman, because people are not expecting me to be photographing them when I’m talking to someone. It works well. Didn’t think it would until we did it! “

This idea of a companion or side-kick acting as a kind of decoy,  was definitely one of the motives behind one of the most celebrated “ Street Photography “ double-acts. When Walker Evans asked his friend and young apprentice Helen Levitt to accompany him on his New York Subway shoots (1938-41), with his camera partially hidden under his coat, he believed that his activities would be less noticeable if he was accompanied. Four decades later, Levitt returned to the subject and produced her own iconic set of images, this time on her own.

While the Evans/Levitt collaboration was in some ways a partnership of convenience, applied to one particular project, there are some current collaborations in Street Photography, whose bonds are based on closer ties, either of love or blood !

One of these is the Australian couple Julia Coddington and Gerry Orkin. Julia is very active on the international circuit, championing among other things the work of women photographers and acting as judge on several celebrated festival competitions, such as Miami Street. Gerry has vast experience in promoting and coordinating documentary projects, notably in Australia. The two run regular Workshops together (and separately) and therefore both on a personal and professional level they are well placed to provide feedback on the pros and cons of Street shooting as a pair. First Julia and her thoughts on the subject. 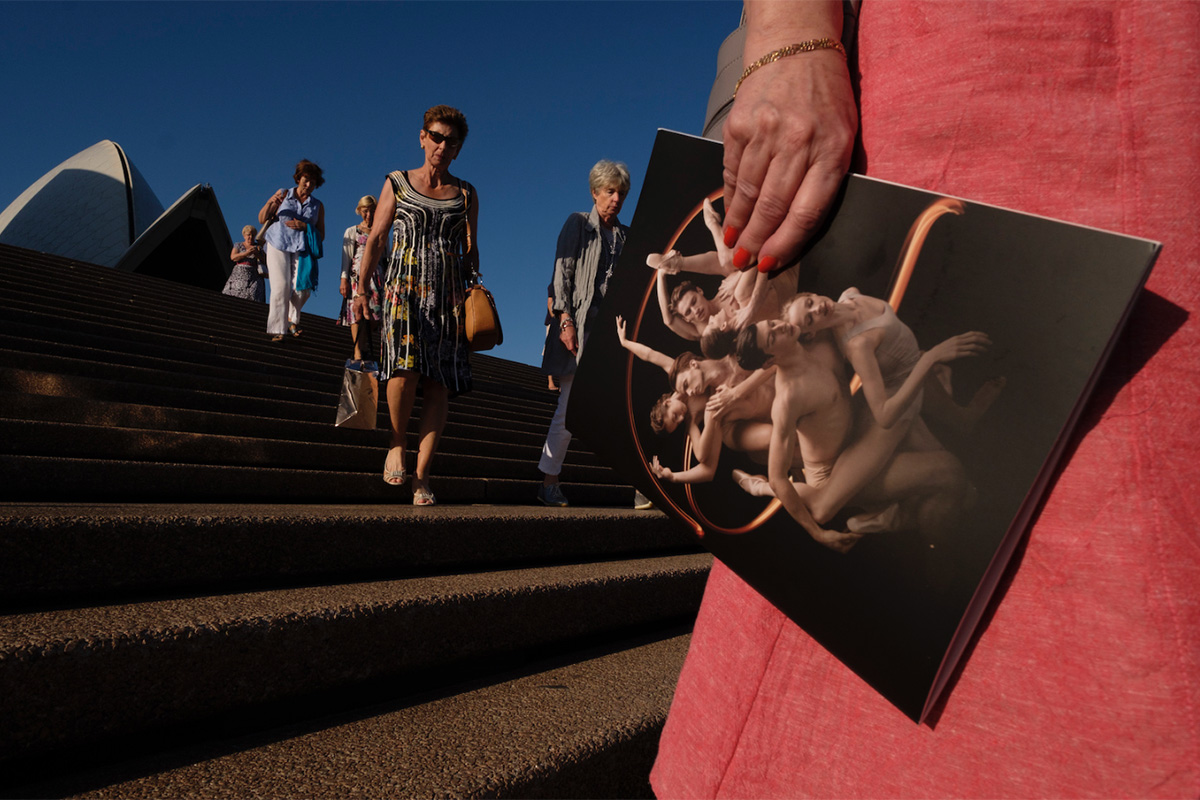 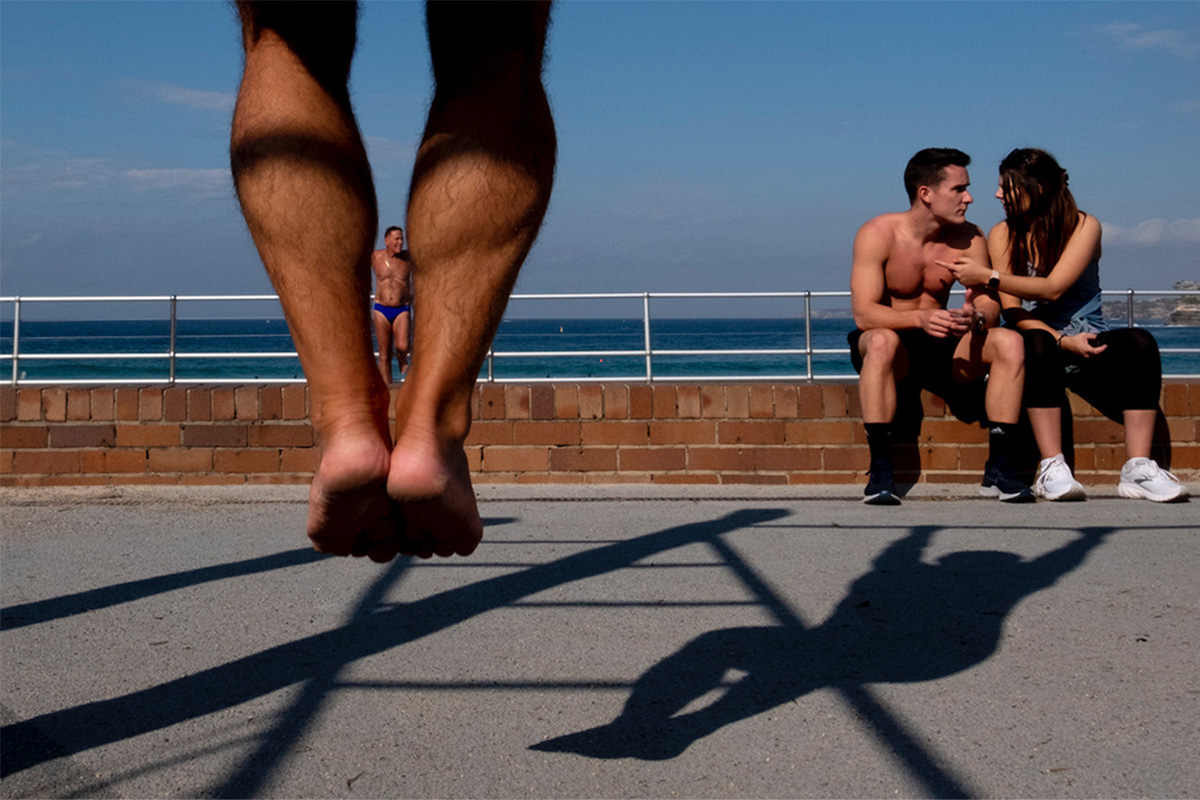 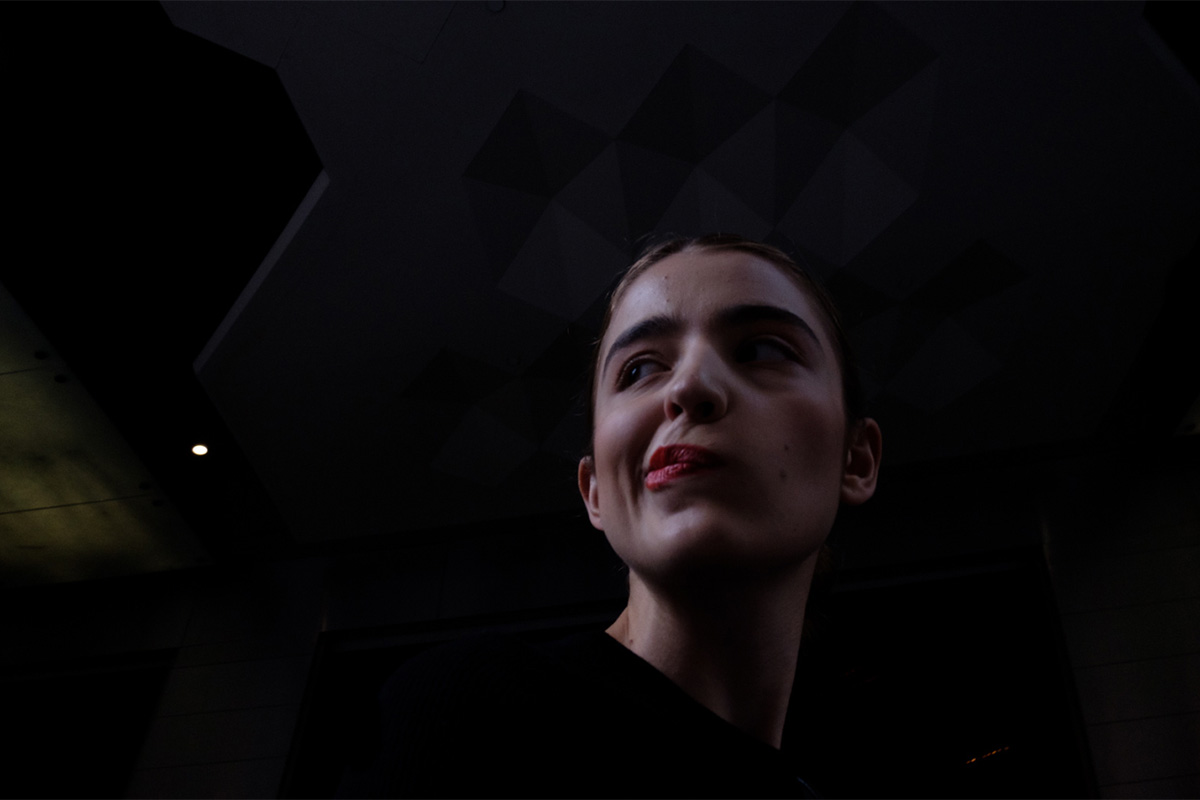 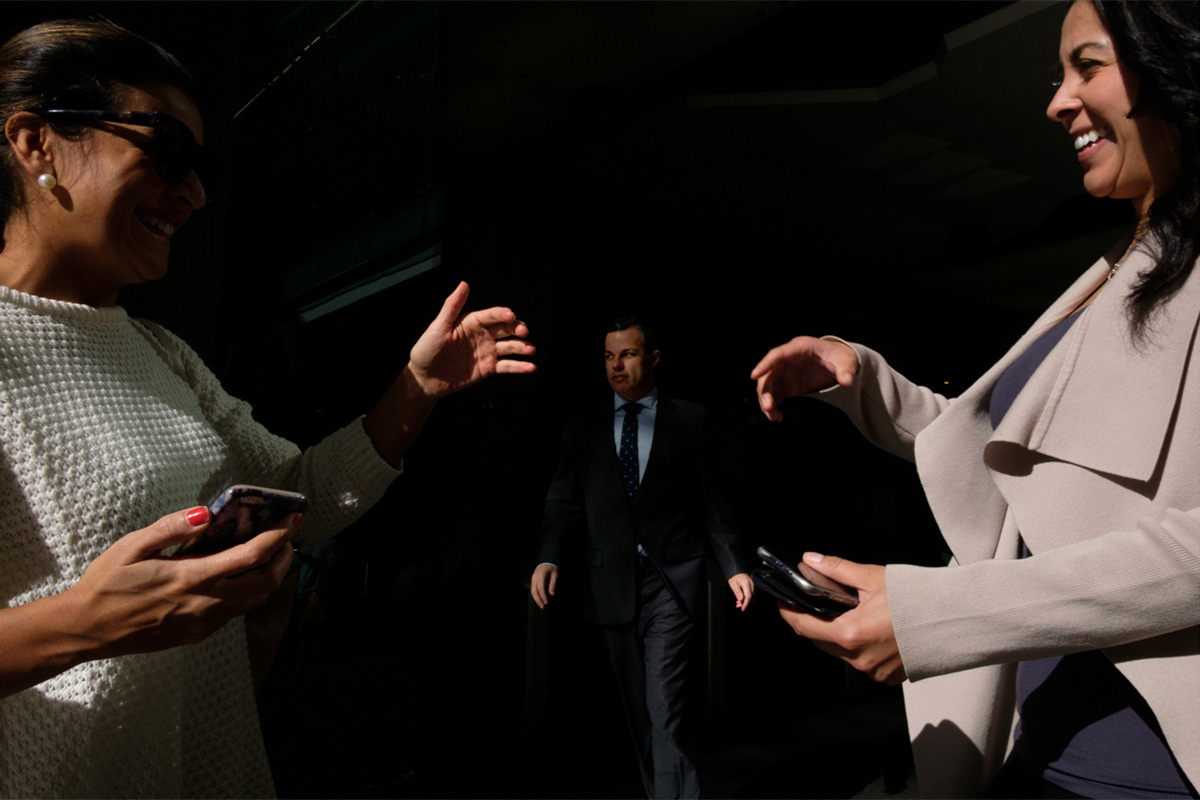 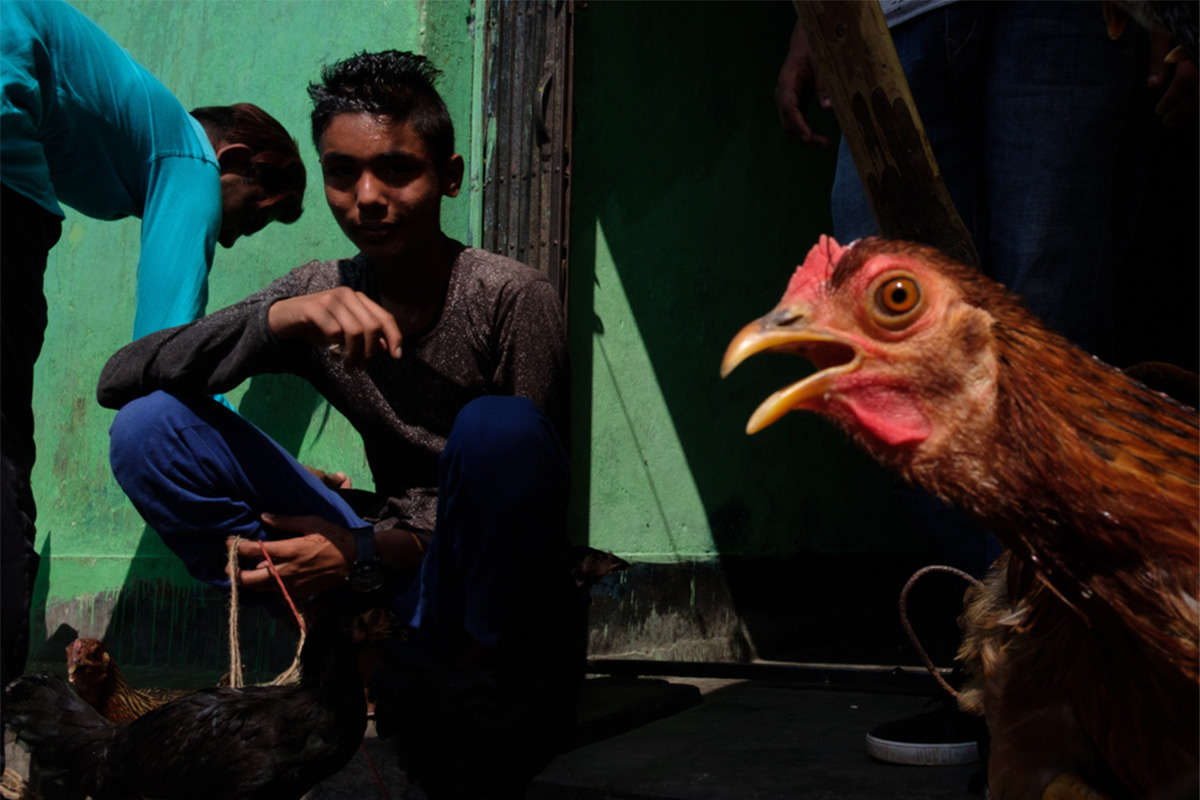 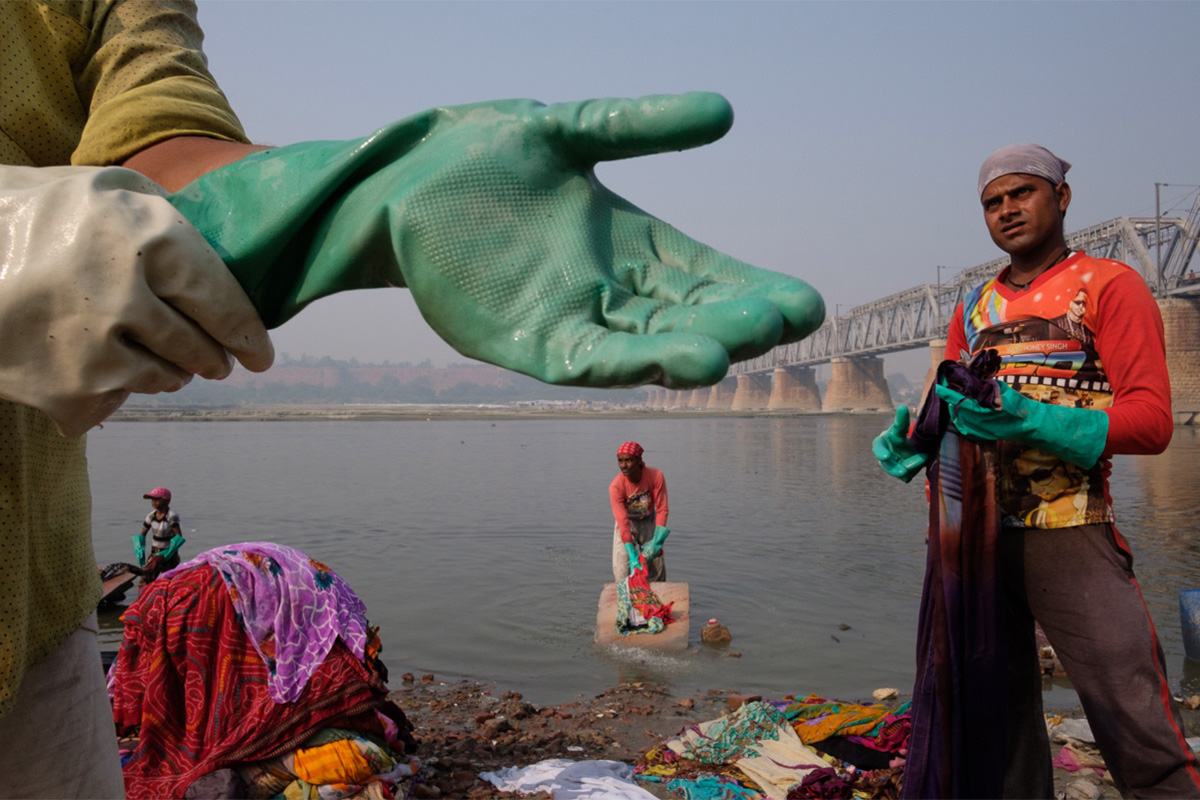 “Gerry has a tendency to race towards a scene.  I call him the ‘barger’. So of course he is always there first and claims it as his and then gets cranky if I get in his way. I’ve now learnt to just forget it, let him have it and go find something else. There is the possibility of competition when you’re both street photographers in the same place, shooting the same scene. This was a problem in the early days, but we’ve since matured and worked out strategies to get less annoyed with each other.  Our styles have also evolved and we more often now seek out different things to photograph. Knowing your partner is close by provides an extra sense of security if you encounter an issue, such as an angry subject. This added sense of security is an advantage when travelling or working in places which are not as safe for women… Another advantage which is not directly related to shooting on the streets is the fact that after a shooting session, we get to look at our images together and have someone there to ask if a photo works or not.  We bounce ideas off each other, share photo books and gear, and generally nerd out together on street photography. Finally, though you can bring home some crankiness when shooting with your partner, you also get to kiss and make up too !”

Now for Gerry’s point of view ! 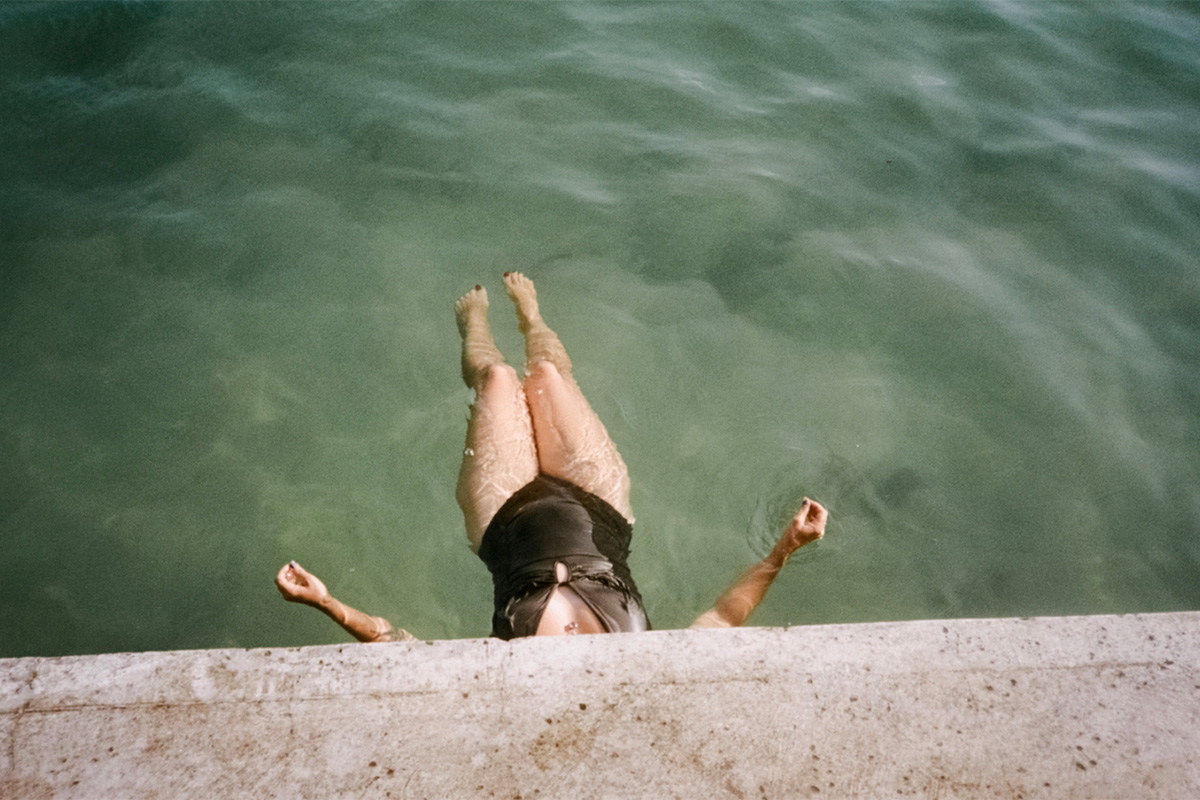 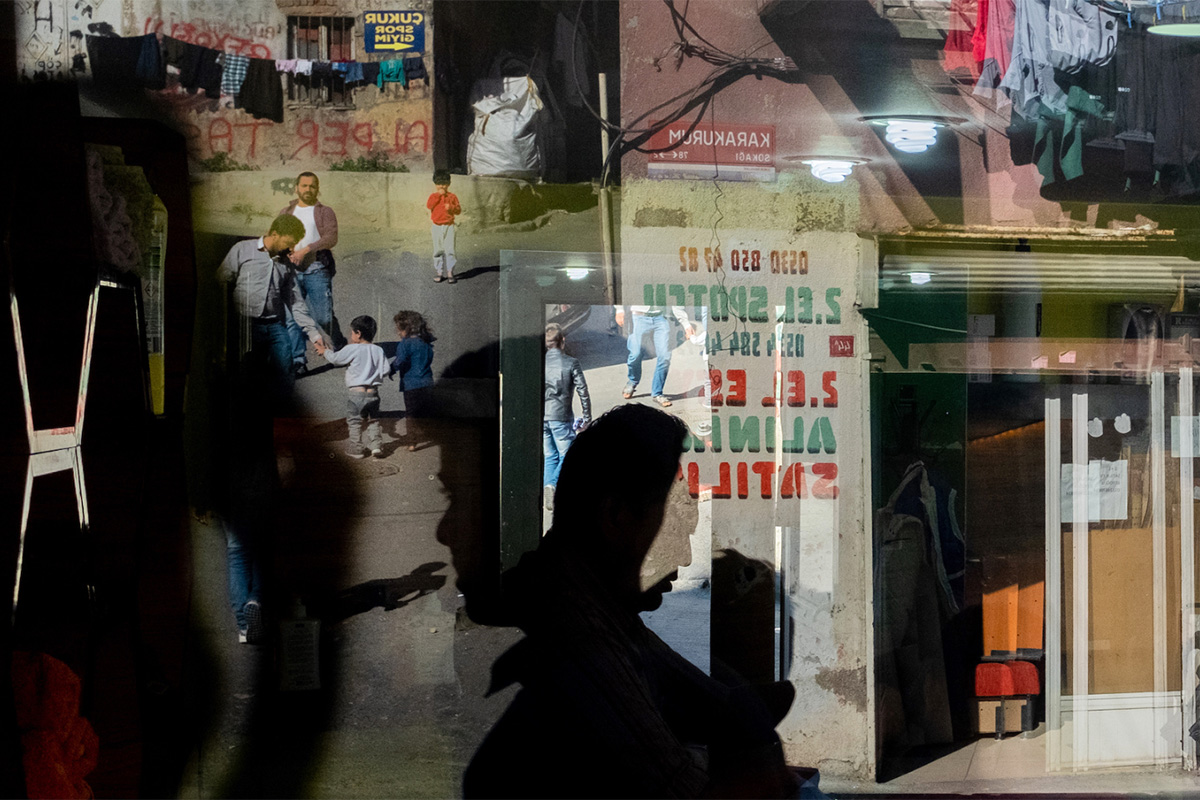 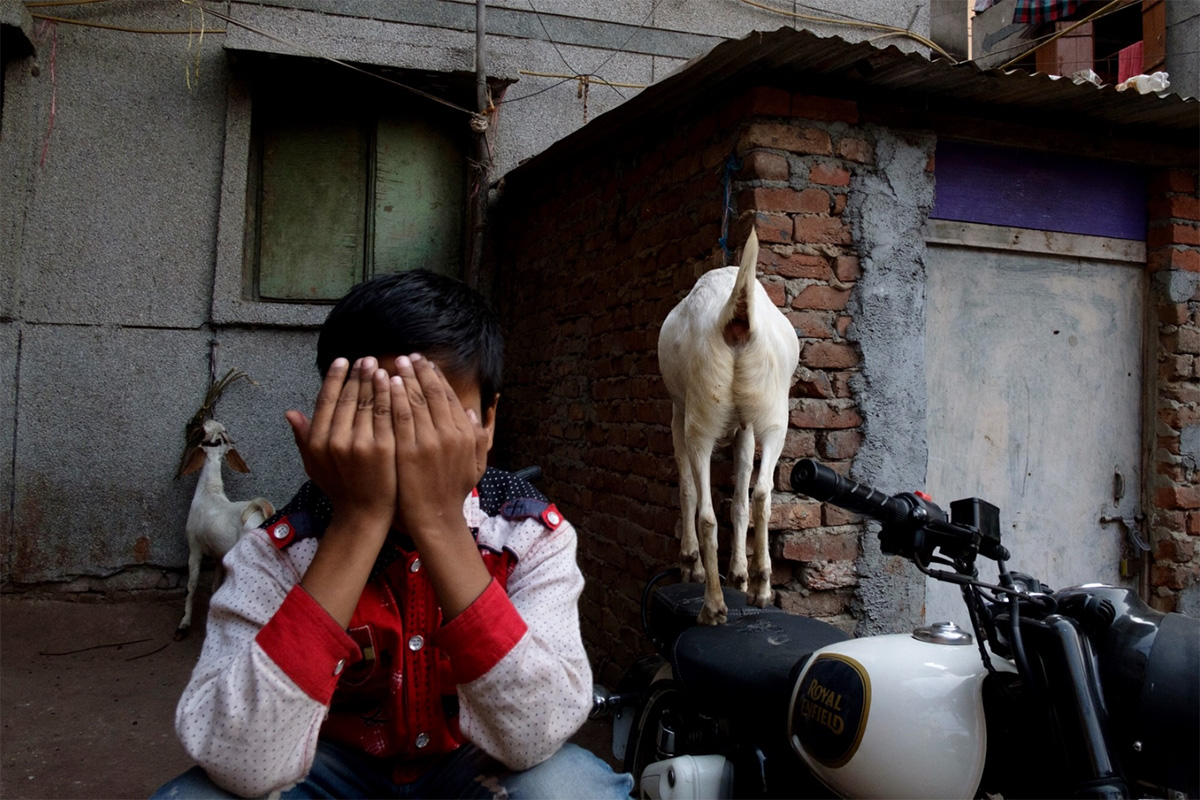 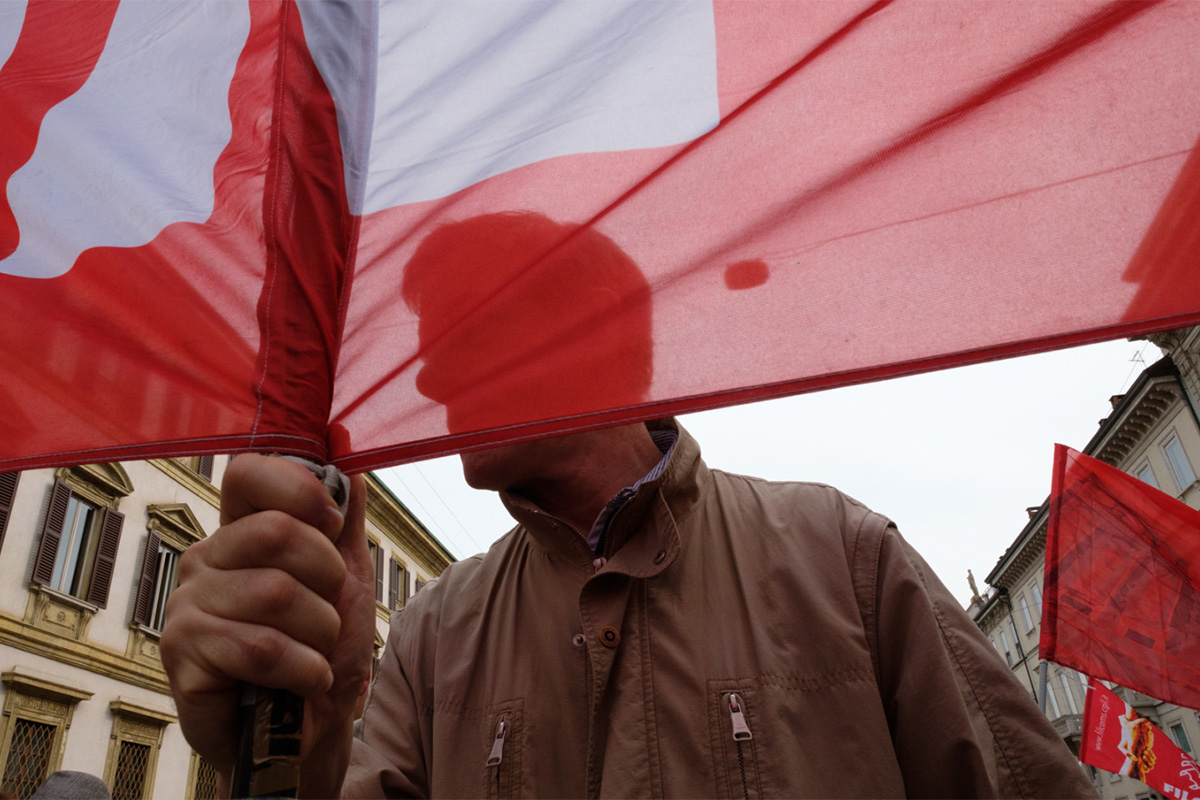 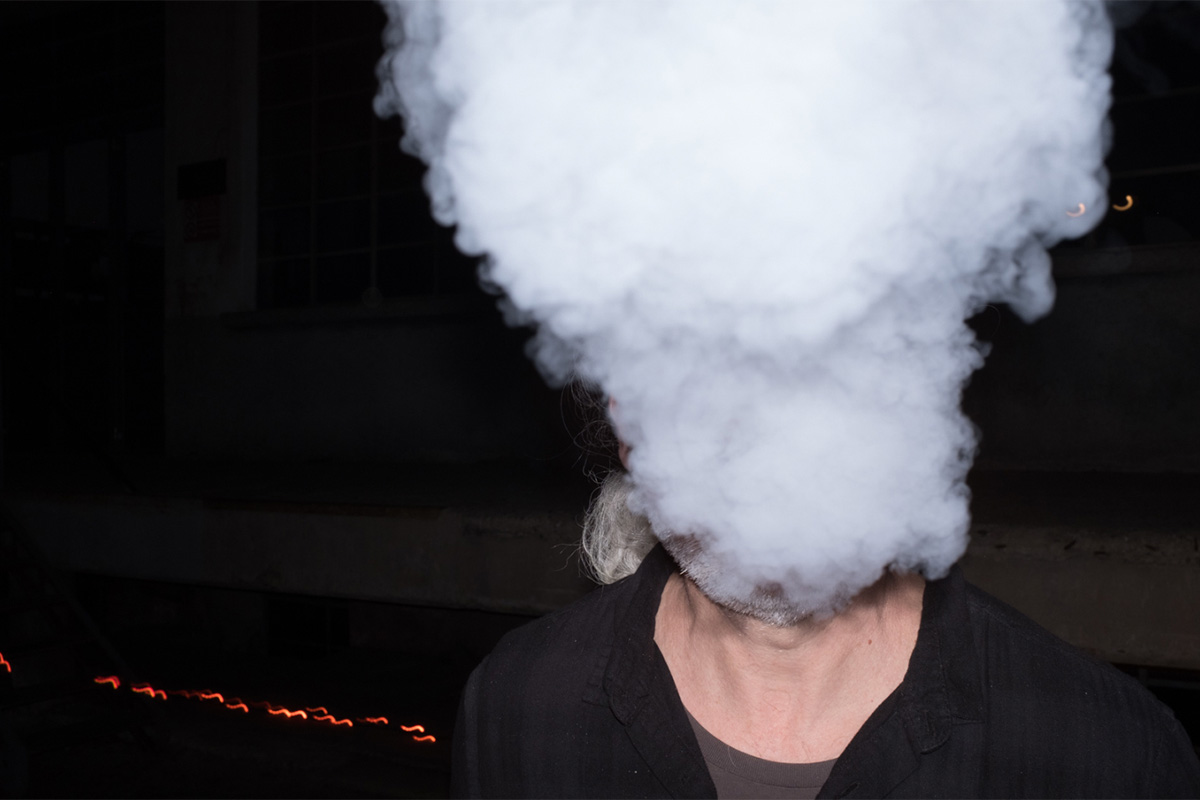 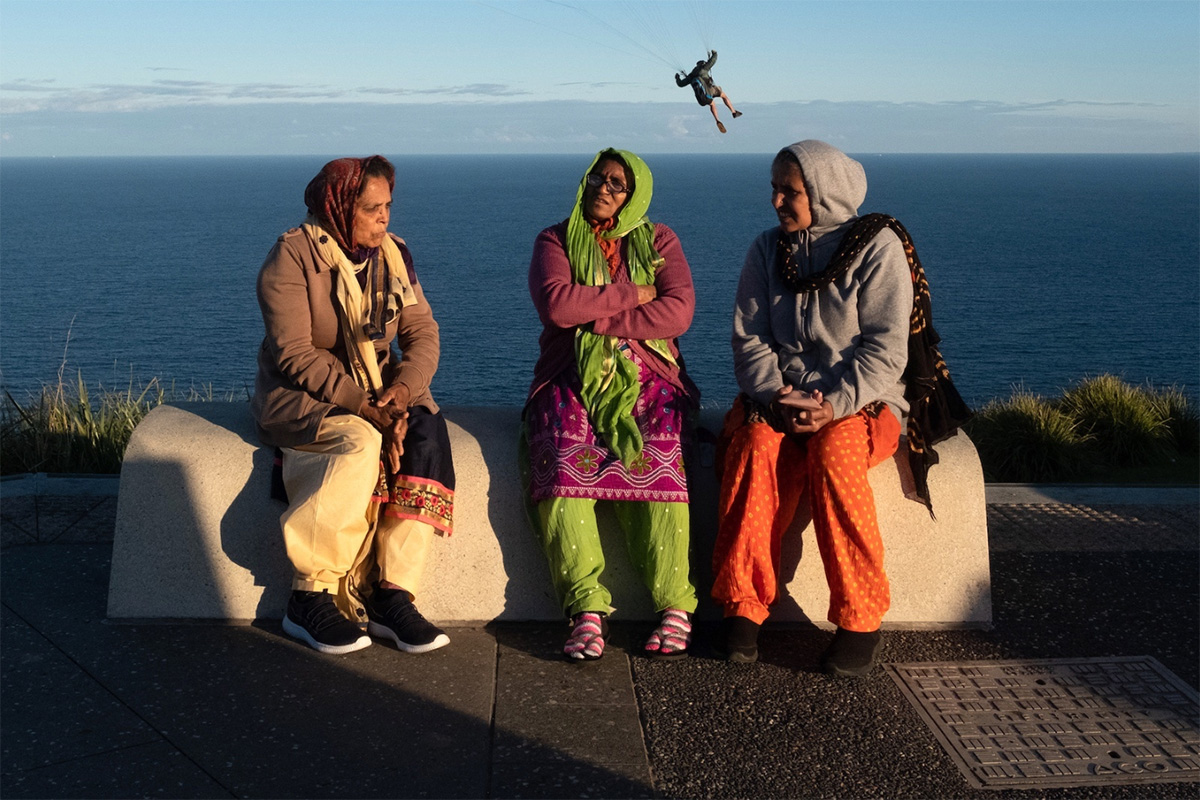 ” To start with, until we worked out how to do it, it was difficult to be out shooting together. Now, a few years down the track, I love being out shooting with Julia. While we are interested in different subjects and see things differently, we sometimes still get in each others way, and we both accidentally appear in each others photographs all the time. Usually that’s just one of us being careless, or over-enthusiastic, but it can also be because we use different focal length lenses and so work at different distances from a scene or subject. As Julia works closer, she tends to be the one who gets in the way. While out shooting, the perfect distance from each other is different corners of the same block, or a street away from each other. That said, as we wander around together we sometimes see things that we know will interest the other, and we each have images that were made after one of us alerted the other to the potential. More broadly, it’s great sharing a passion with a buddy who understands what this weird activity is about, who I can explore new locations with and who I can chat with about the light, the vibe on the street, and interesting interactions etc.”

Last but in no way least, any discussion of contemporary Street Photography collaborations cannot be made without referring to the iconoclastic work of the Bragdon brothers. Gavin & Gareth, born in the States, but now settled in Edinburgh, have made a name for themselves with their high energy, flash-filled, creative pictures.

Gavin describes the process that has driven them on together as a “team”.

“Gareth and I got into street photography at the same time, so we’ve always been shooting “together”. We don’t always shoot at the same time, at the same things or in the same way but inevitably and inadvertently you end up collaborating which ends up showing in our photos when they’re put together. When for example we put a set together about Edinburgh where we live, you see a portrait of the place that’s stronger and more complete than had we been presenting individually. In terms of competitiveness, especially earlier on, there would be periods where one was “ahead” of the other and consciously or subconsciously you’d be like “fuck, I need to catch up”. Speaking for myself, there is a difference between shooting by oneself and then shooting together. By myself I’m more likely to step back a bit more, go off the beaten track or even “away” from street in the classical sense, but when shooting together there is more energy or “balls” obviously. I can’t say one is better than the other. There is of course a lot of crossover in our photography , but I think enough differences. I’m more likely to get the surreal/experimental photos, but Gareth is better at that full, close, composition that feels like it’s sucking you into the frame. “

Here below are a few situations of the brothers shooting “together”, with Gareth’s images featured as the first of the pair. 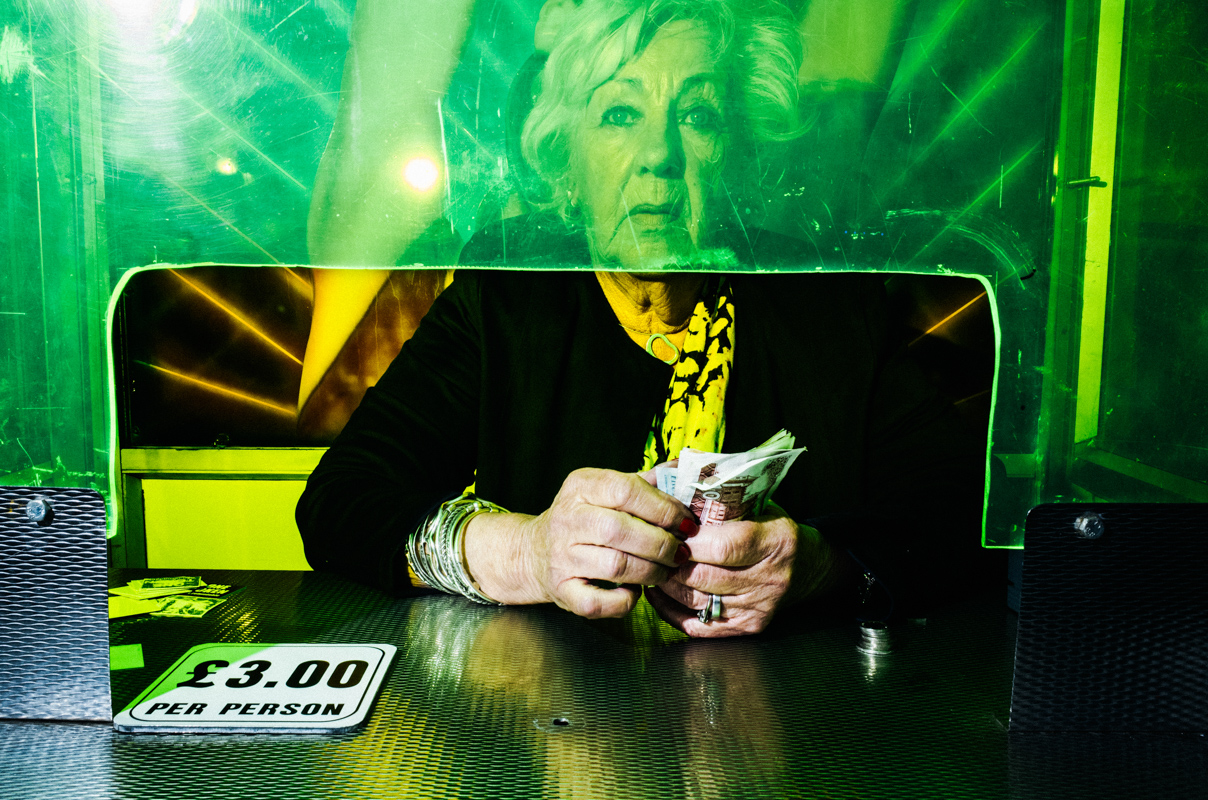 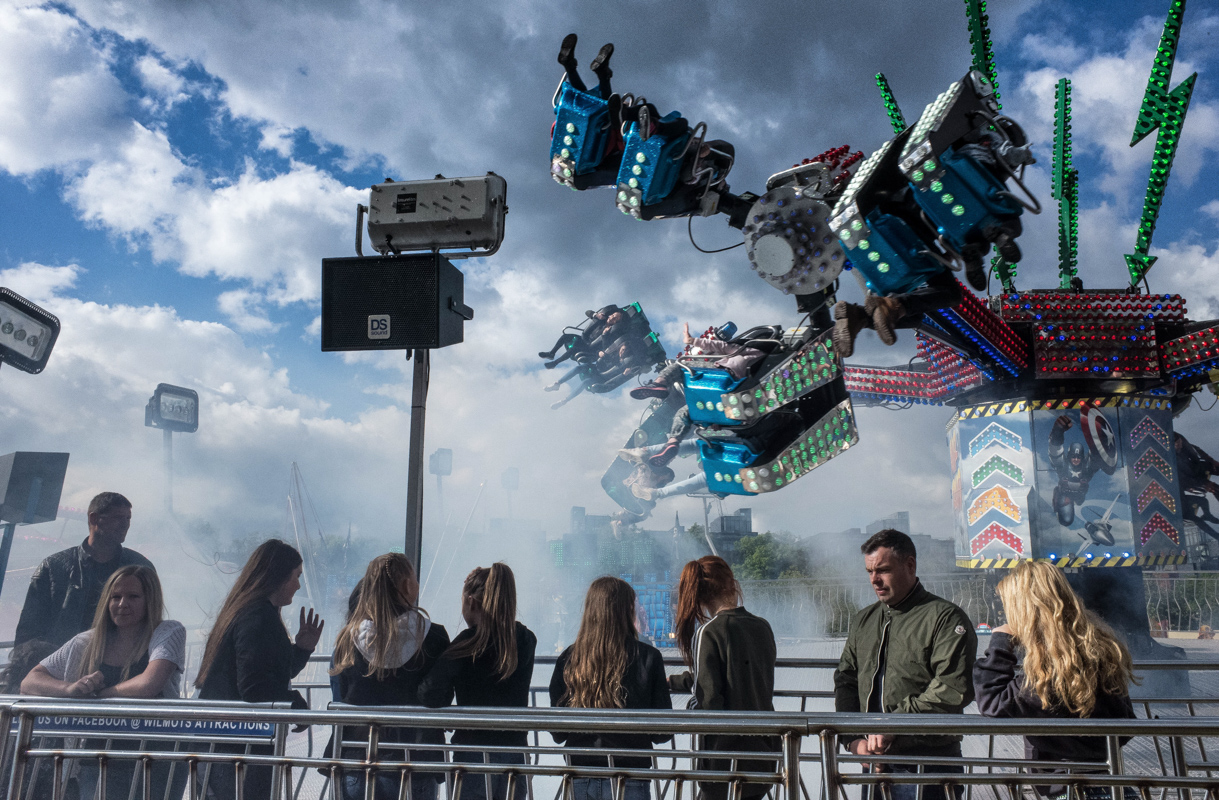 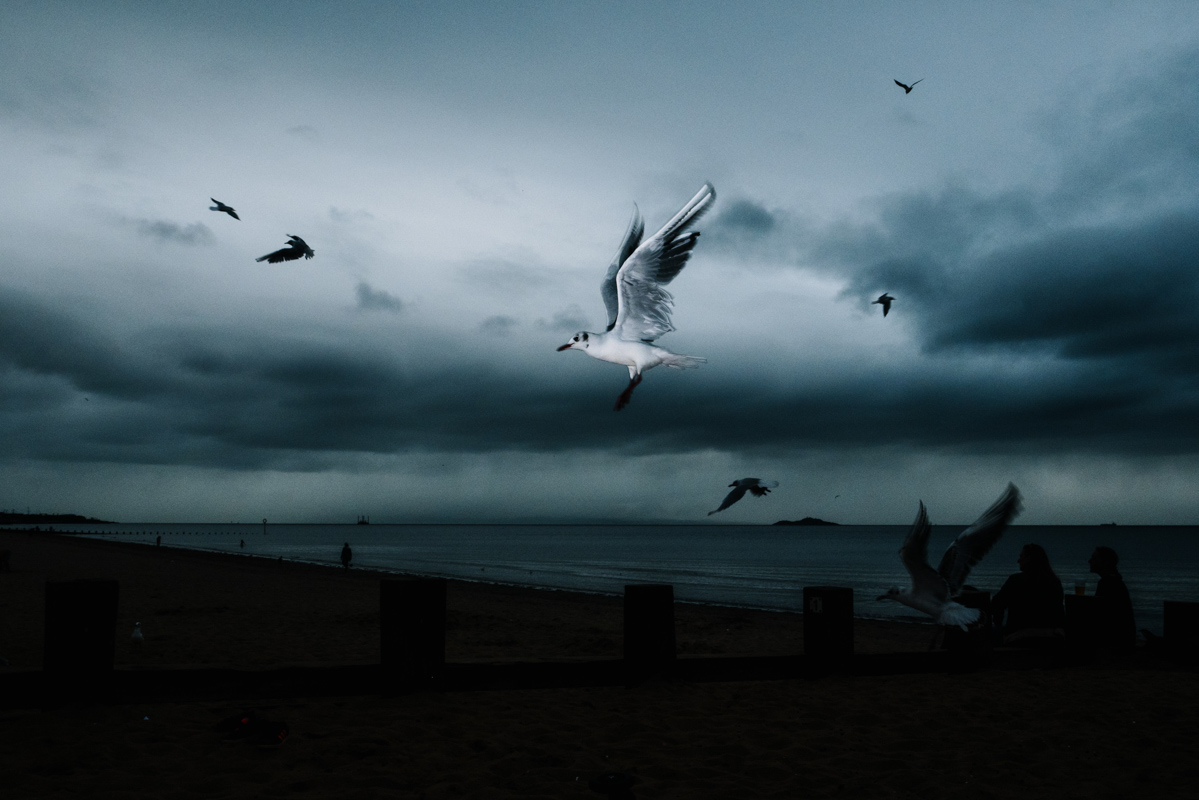 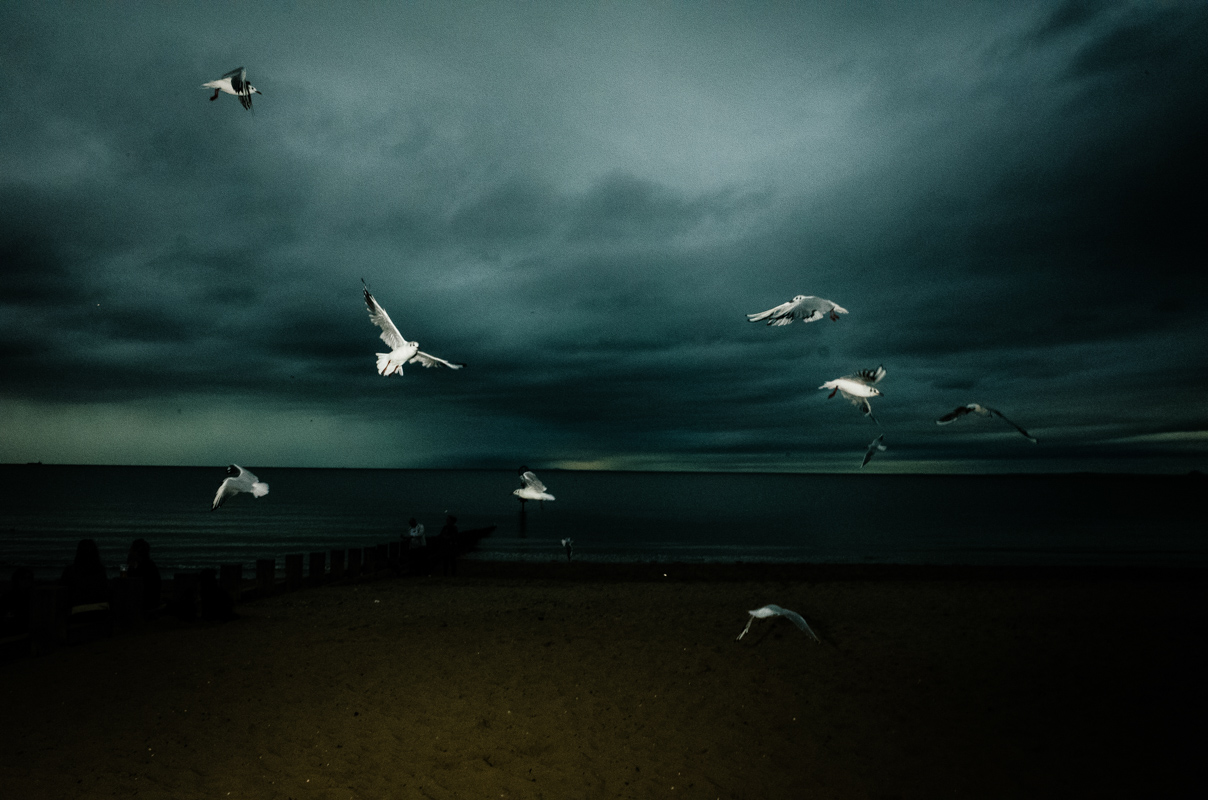 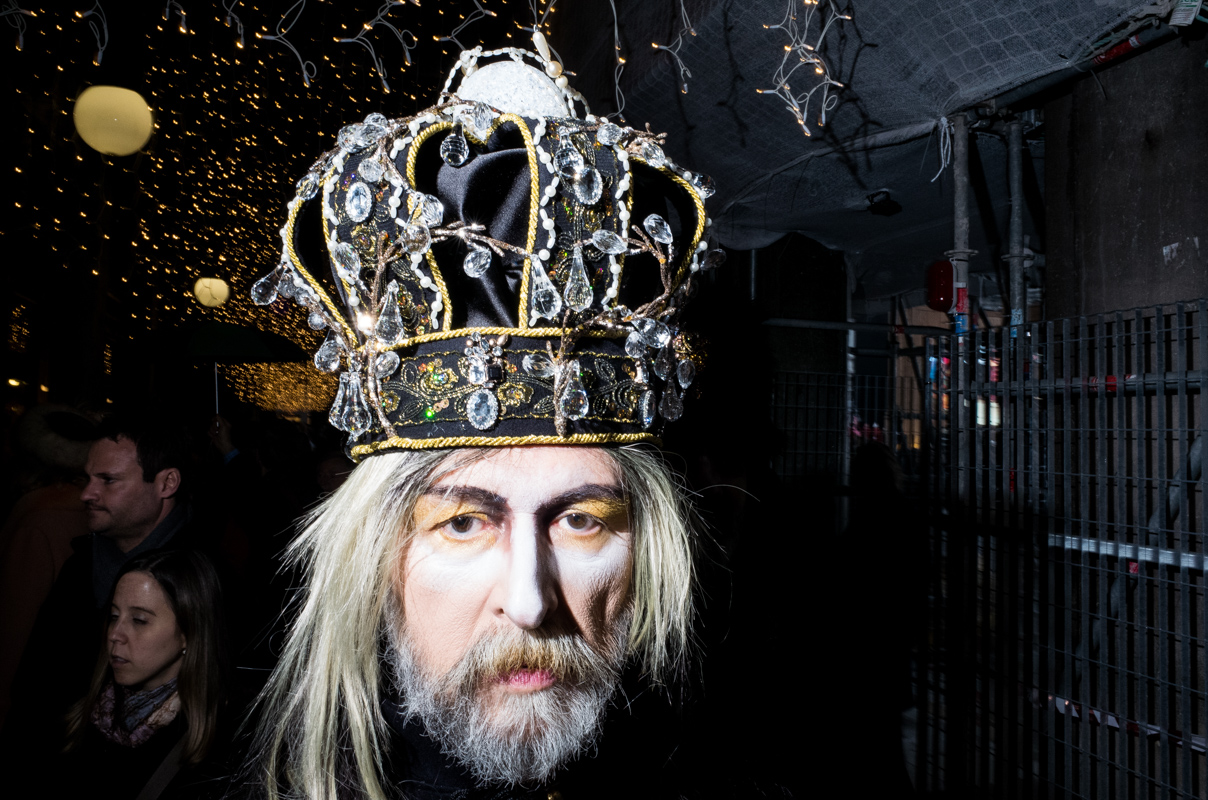 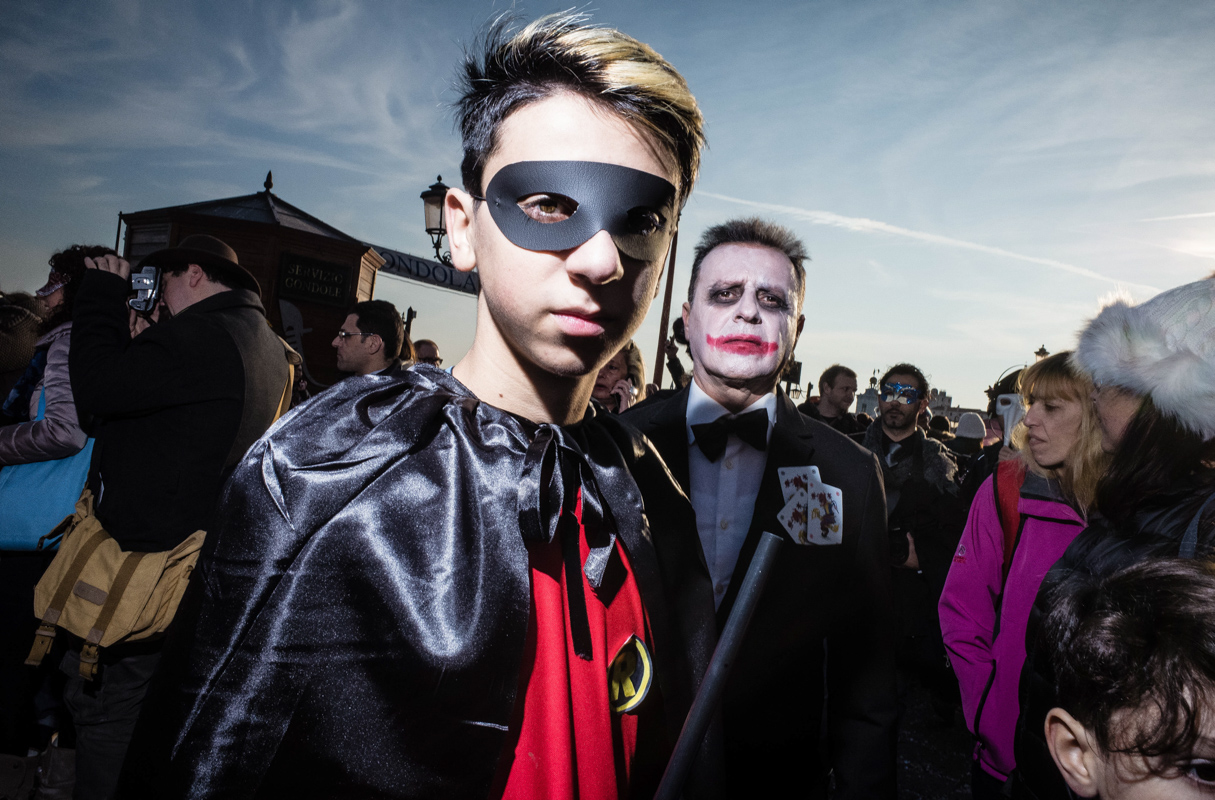 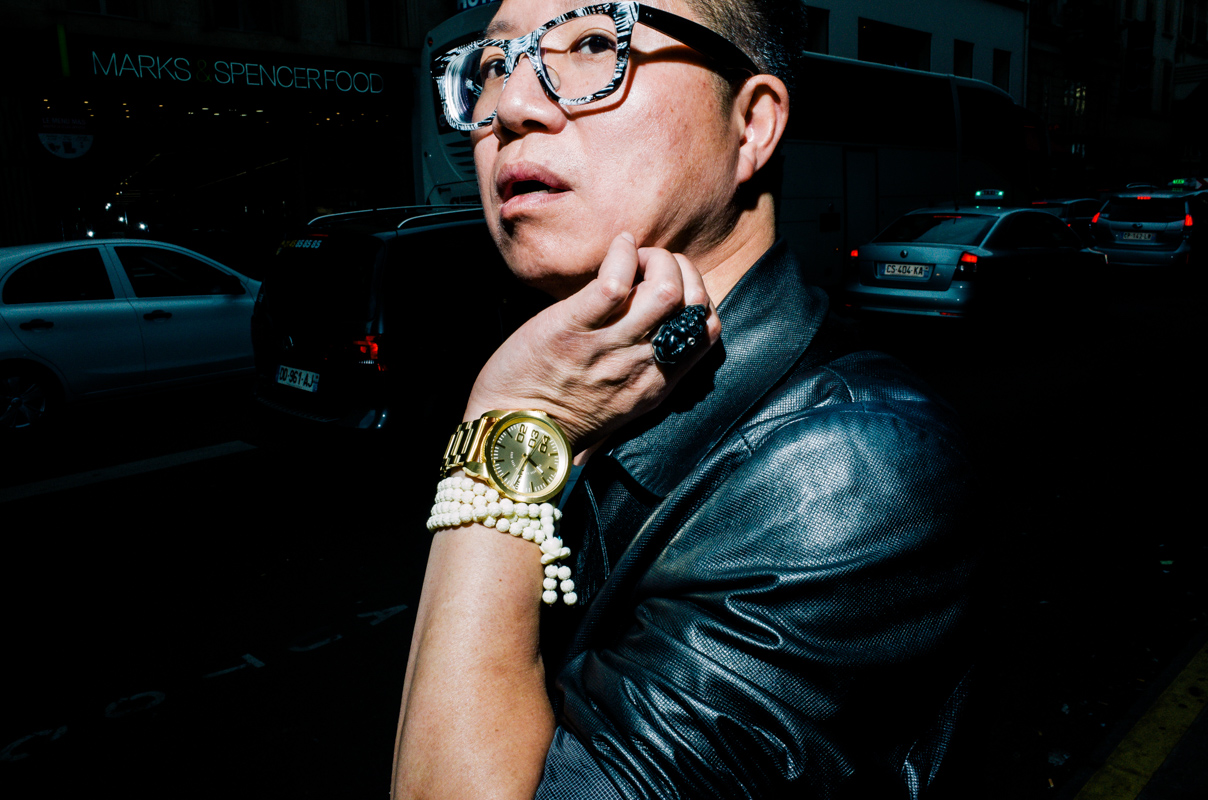 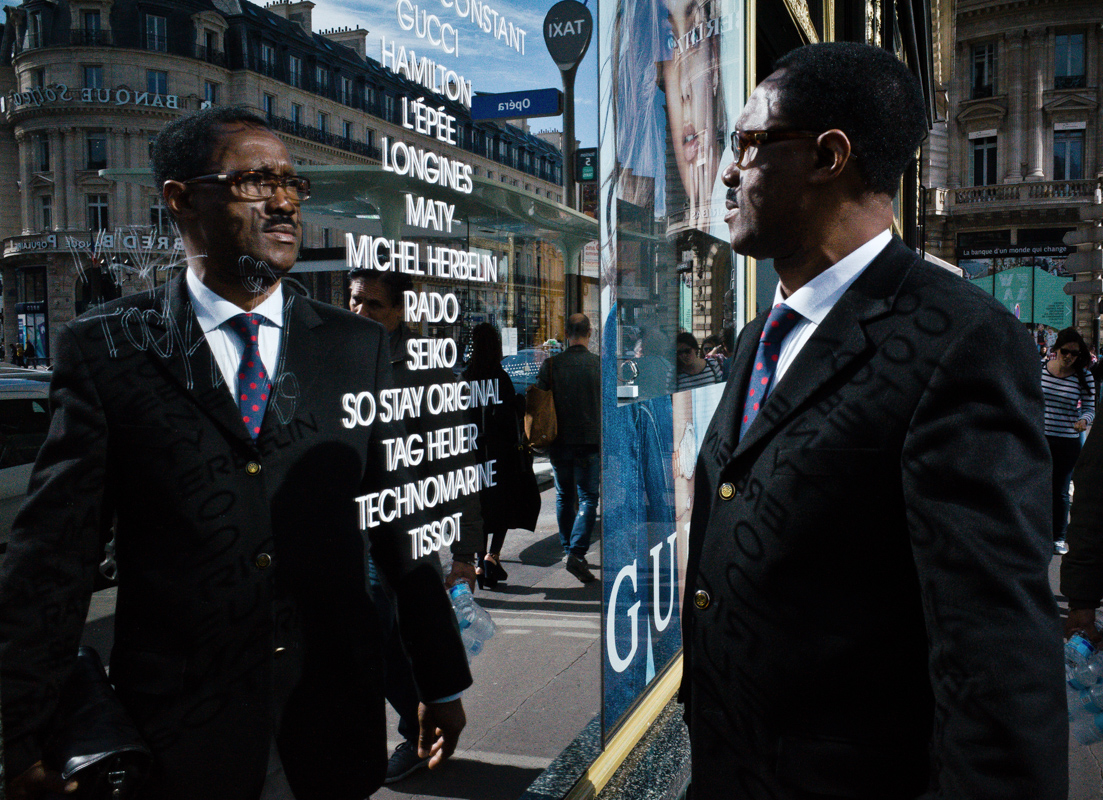 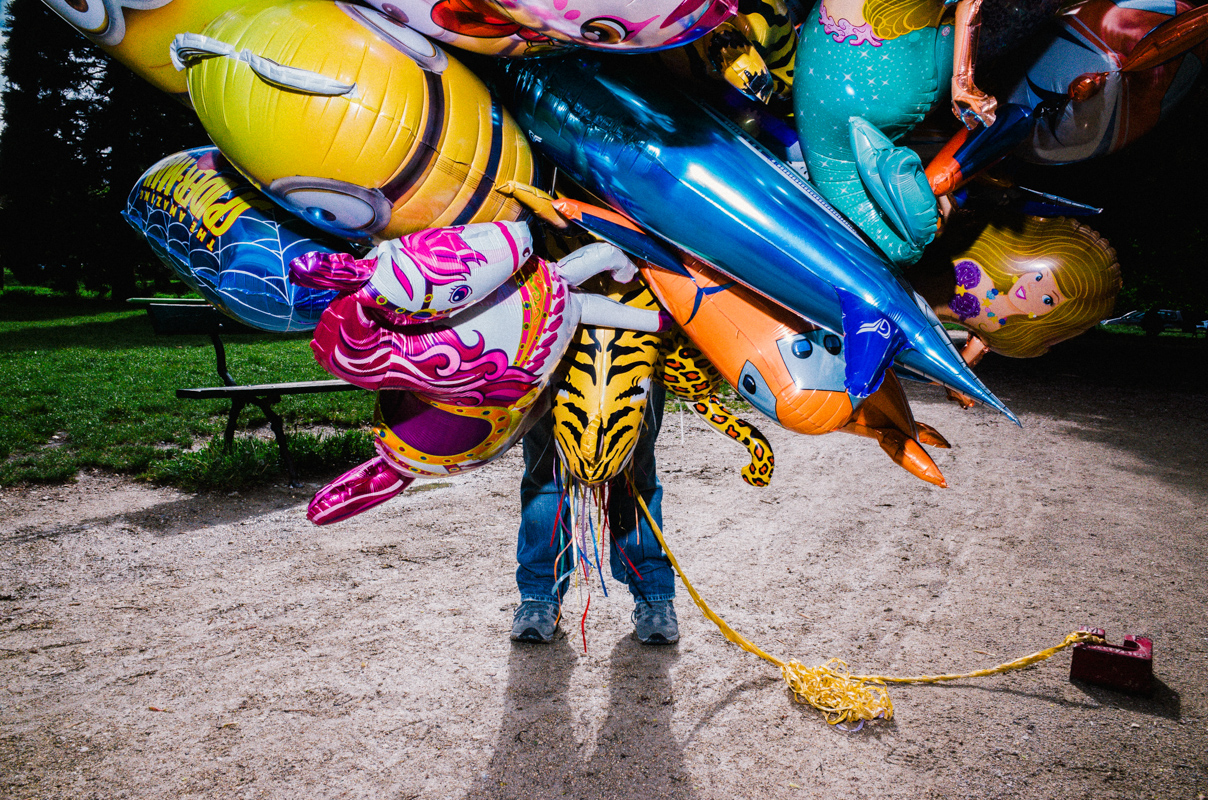 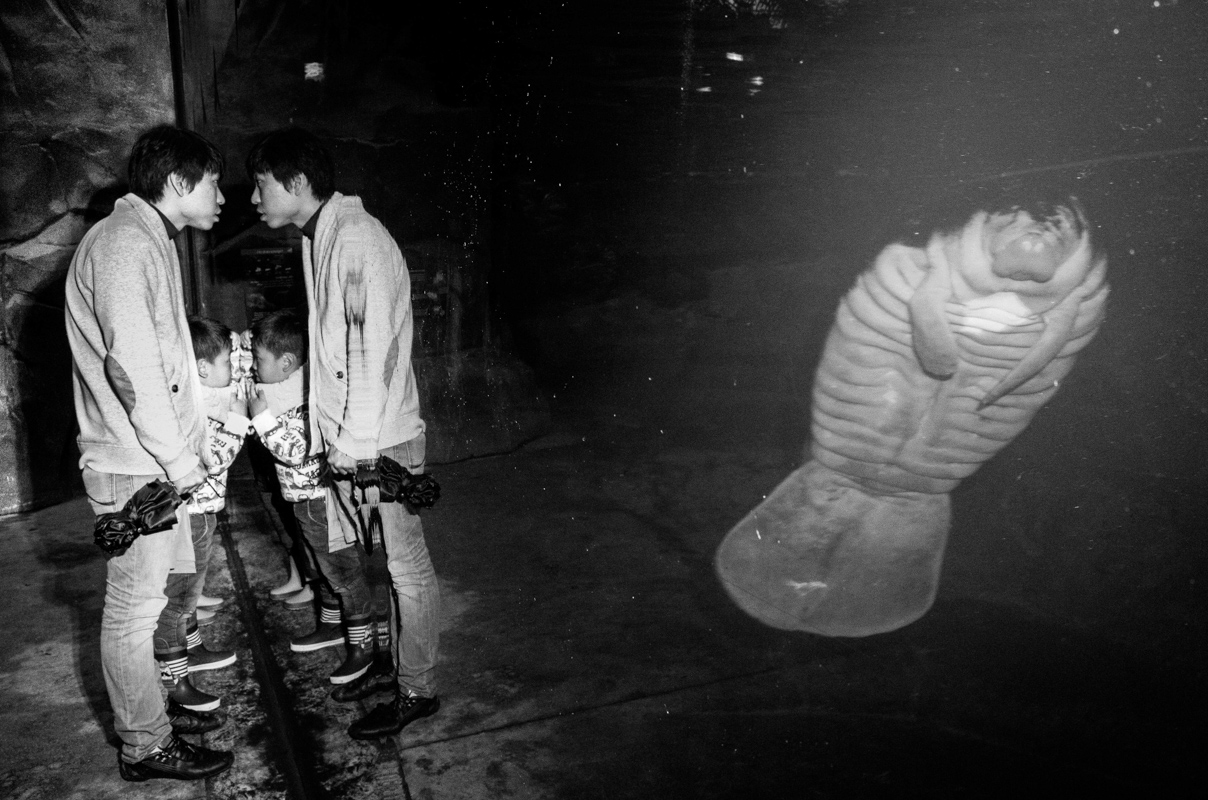 In light of my own experience and the opinions of these other established photographers I would conclude the following. Just as Street Photography itself is too broad a church to be categorised simply as shooting strangers on the streets, so the practice of its craft cannot be simply reduced to the solitary person in stalker mode. Many interesting images have been created while hanging out with fellow photographers, friends, loved ones. Being both sufficiently alert and relaxed is the key to success, and there’s no pre-made formula for achieving this.