The title of my piece is I confess deliberately provocative, but now I’ve got your attention, please hear me out. On one level, I have no legitimate right to make this claim, as I’m no position to speak for myself, and I’ve not had the privilege of looking, for example, through Joel Meyerowitz’s or Elliott Erwitt’s back catalogues.

What I think I do know though is this. When you take part in a Workshop run by one of Street Photography’s current star names, you will have the pleasure of being presented with a selection of their best work. That is in itself completely understandable, and represents in many ways the reason for signing up in the first place, a desire to be inspired and motivated by someone at the top of their game.

However, it is pretty unlikely that they will show you a selection of their worst work. And yet I believe this is in some ways a shame. Far from wanting to knock “star names” off their pedestals, I intend to show that one can learn just as much, from “bad” or “error” pictures, as from the good ones. Indeed it may be that the “shit photos” separate out the best shooters from the common mortals, just as significantly, as the successful hits do.

When I began teaching Street Photography, I seriously wondered how I was going to go about explaining my working method, when so much of the creative force is derived from instinct and intuition. Once I’d done a few teaching sessions though, I began to be aware that it was beneficial to try and demonstrate to my “students”, the process of moving from a first initial visual impulse to the definitive successful frame. 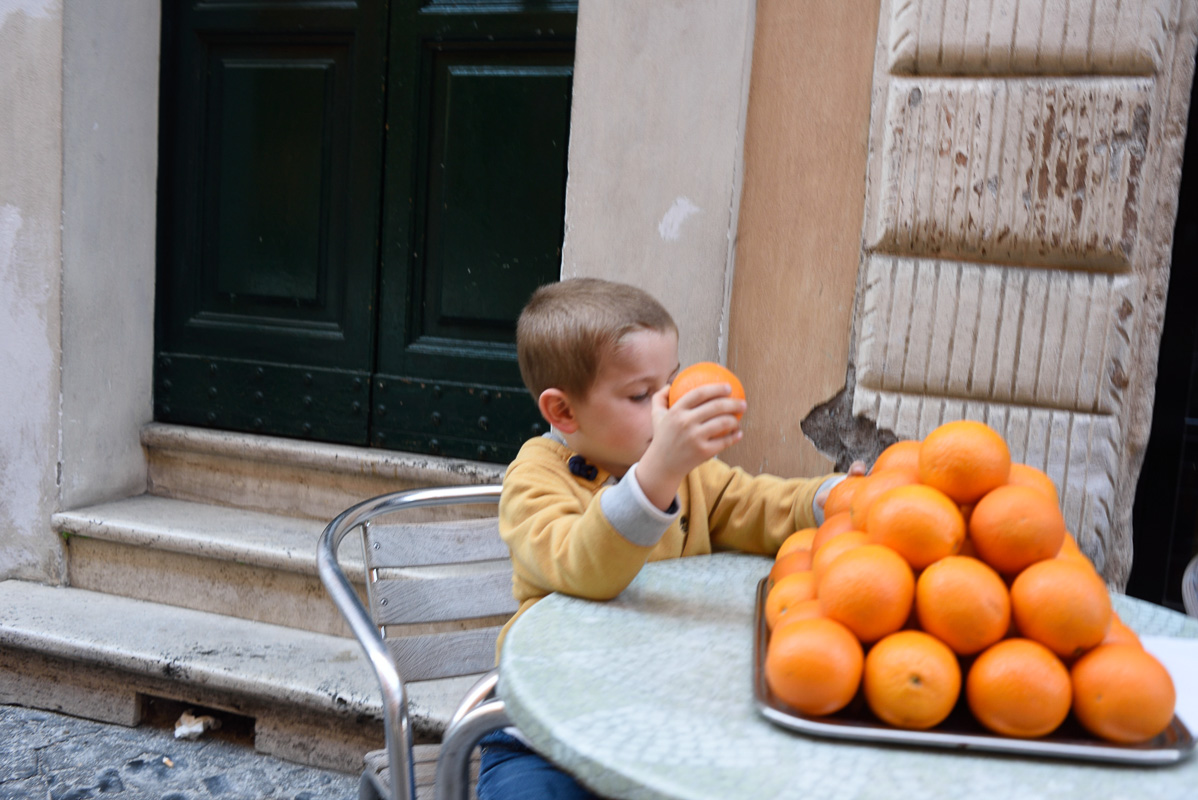 During a week’s shooting one spring in Rome, I found myself walking down a quiet side street, when out of the corner of my eye I spotted a boy playing with a pile of oranges. The bright colour and somewhat incongruous arrangement of fruit instinctively triggered my shooting finger, but the result was poor, creating a blurred and loosely framed image.
Three frames and less than a minute later, I had had the time to compose properly and decide with more clarity what I was really trying to say. The split second timing captured a subtle moment of playfulness. 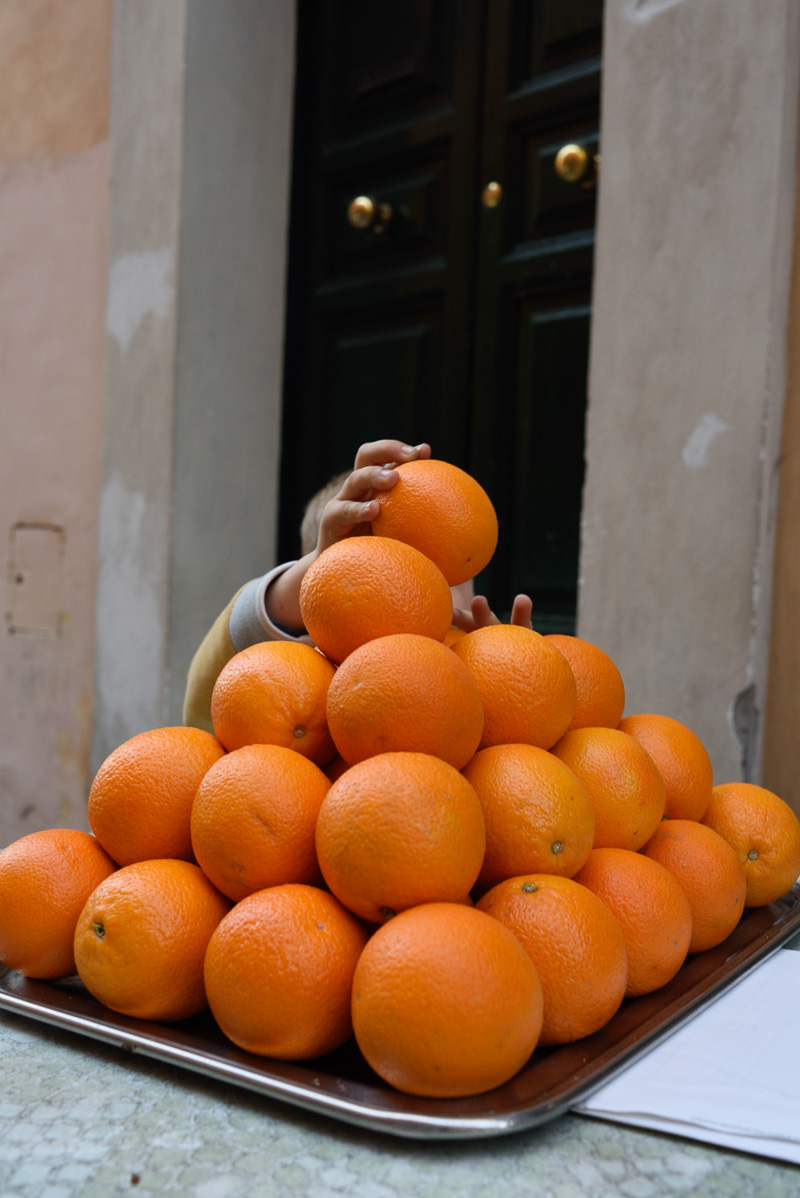 On another occasion, not far from the Colisseum, I was drawn to a brown weathered wall where the long shadows of the evening light were playing interesting games. I began with an upright composition structured around the shape of the street lamp before closing in to a landscape format and chancing upon an intriguing character poised at the edge of the frame. Barely 10 minutes and 100 odd frames had passed between the 2 shots. 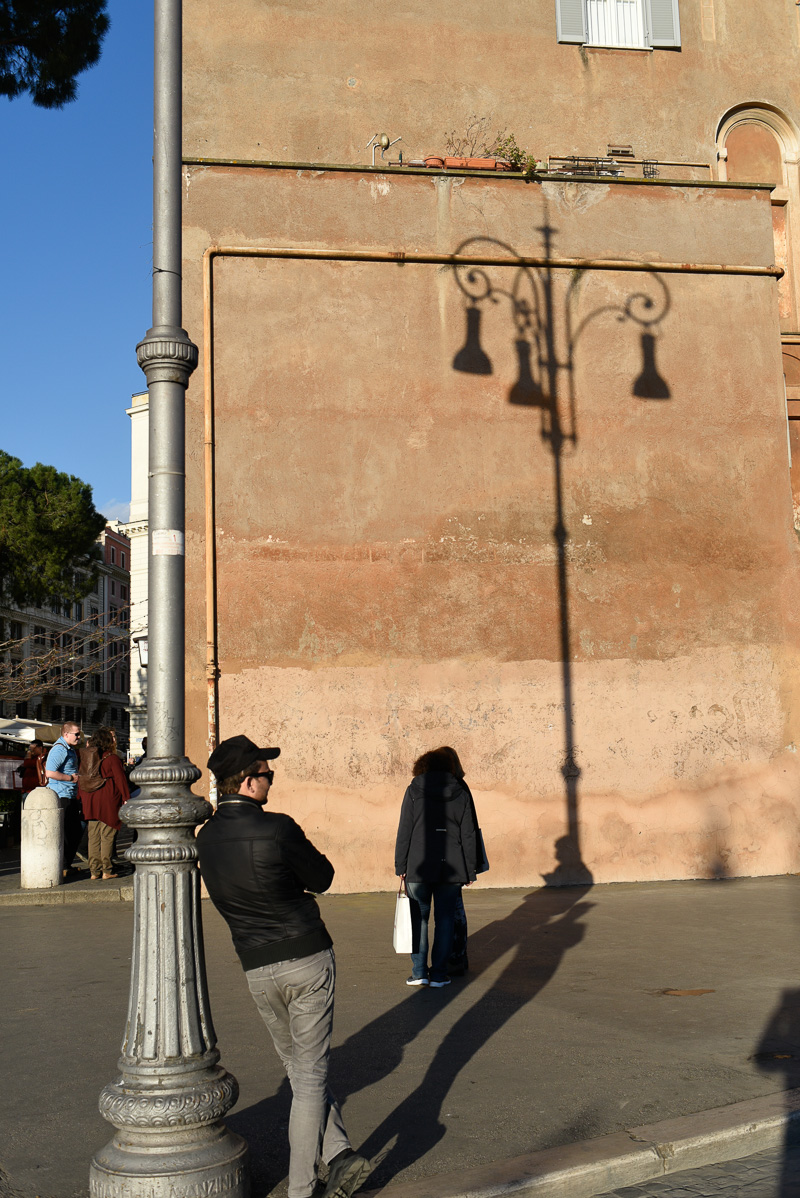 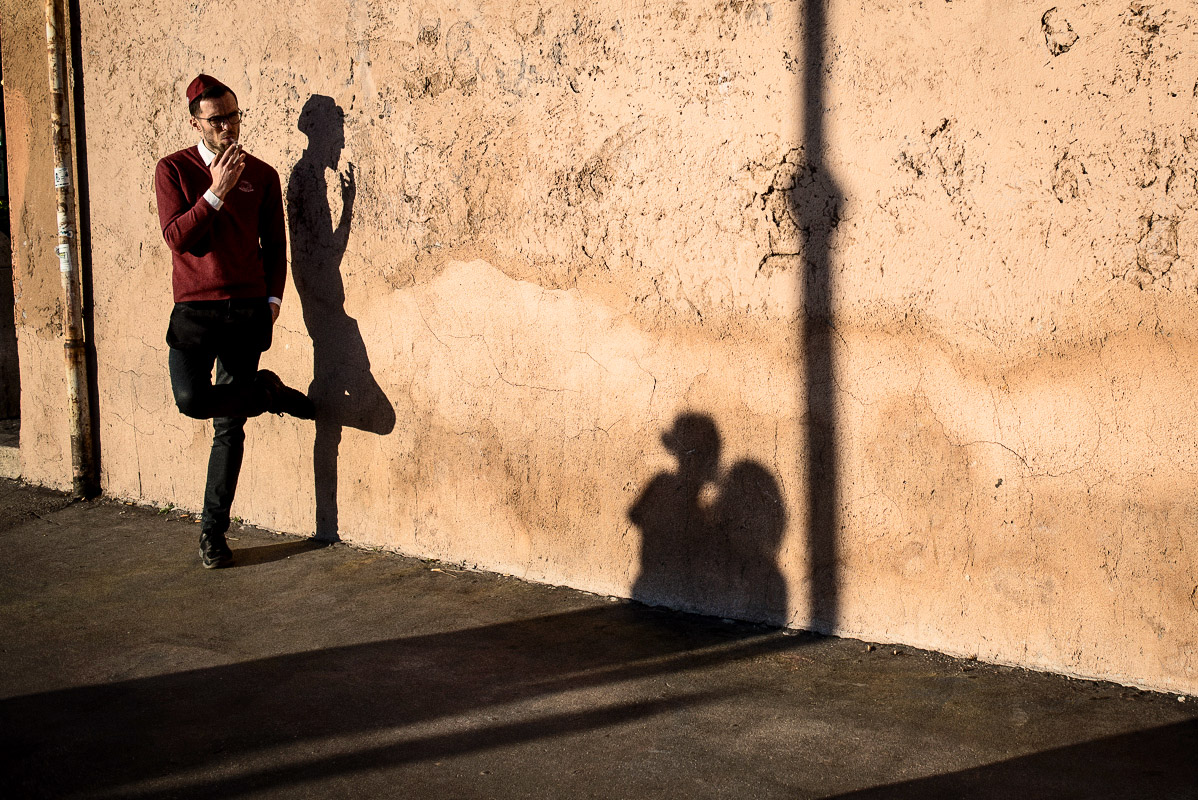 This ” working the scene” is well-known to established street photographers, and those who participate in my workshops are always appreciative of me showing them these concrete steps of getting from A to B. It enables them to realise not to give up on the first bad picture, and to be aware that “sticking with it” can yield impressive results.

I decided to consult two fast up and coming figures on the Street circuit, whose work I admire, and ask them to share with a wider public their comparable experiences of what it takes to move from an average start to a brilliant finish.

Firstly, Sofia Sebastian, a Spanish photographer now settled in the States. Both these examples are shot in her home town of Washington DC. The first “duo” of bad v good picture shows Sofia, looking for a bit of magic by the train station entrance. ” I saw the pockets of light and wanted to capture the perfect arrangement of people, shadows and light”.

This brilliant second shot just received, among many accolades, the Best in Show Winner of the 14th Annual Exposed DC Photography Show.

The second example shows Sofia’s persistence in following a person who caught her eye- “I followed the woman with the beautiful dress for a few blocks until the moment presented itself with her arm gesture mimicking the worker’s cross legs (and the sign). The thing that initially got my attention was the dress but that alone very rarely makes for a successful picture. I was rewarded by sticking around and chasing something that got my attention.” 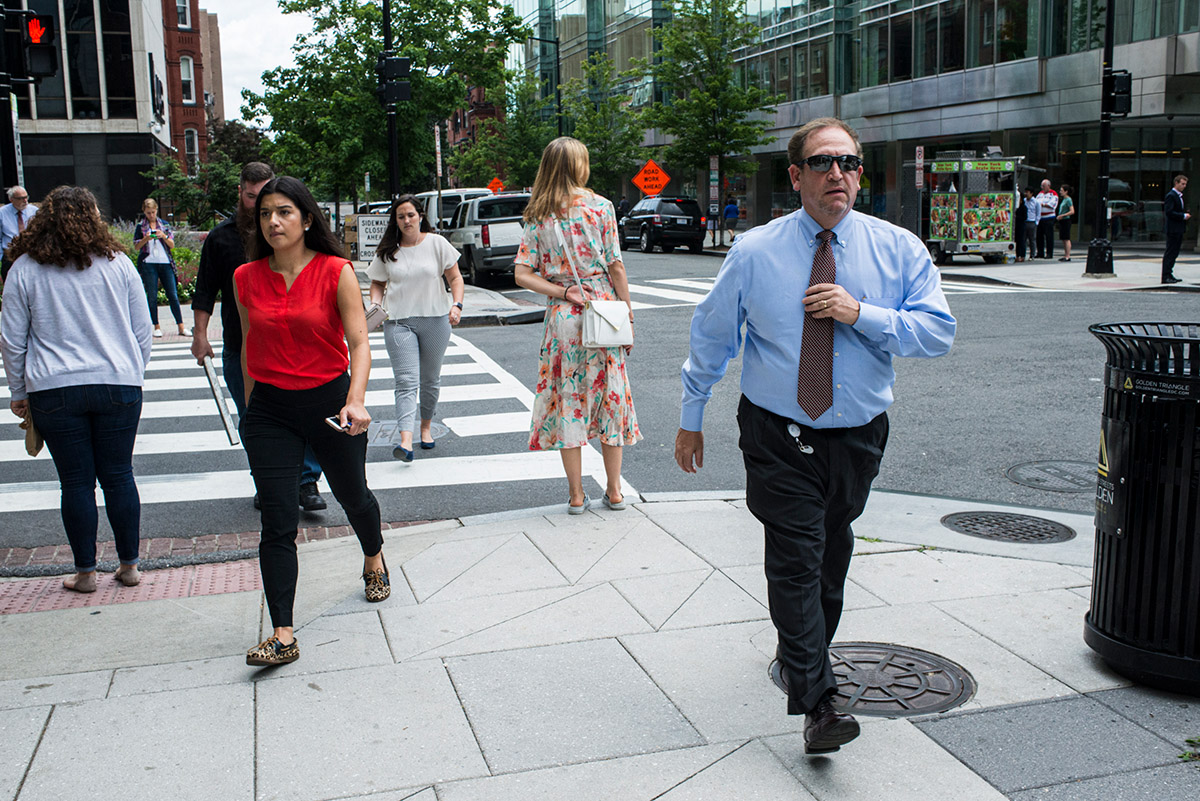 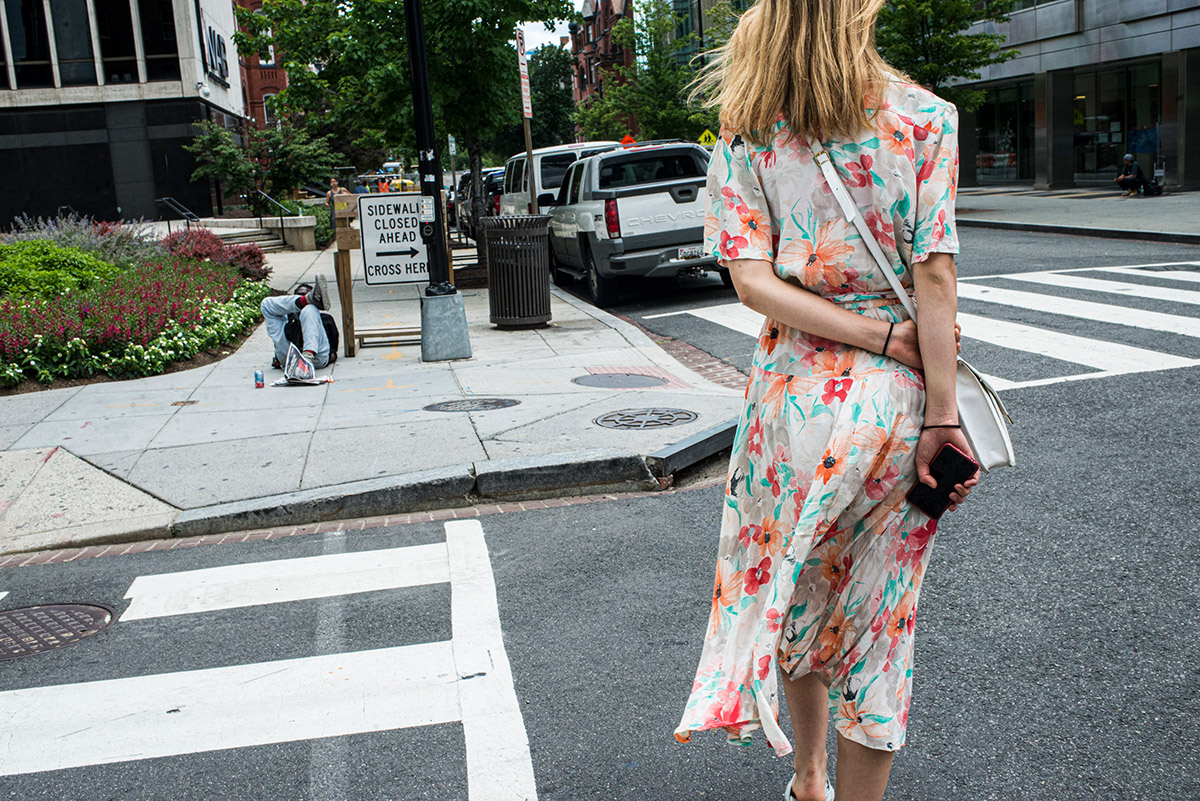 The other photographer I checked in on was Stan De Zoysa, originally from Sri Lanka and now based in Barcelona. He shot to almost instant fame on the publication of this image. It has received countless awards, probably his most cherished being Street Foto San Francisco 2019 – First place singles.

He had first noticed the potential for capturing an unusual perspective when he took this picture overlooking the beach, and realised that there was a lower walkway, here hidden from view, exactly the same colour as this upper level.

For the image to work, he needed the upper and lower walkways to blend perfectly, and therefore went to shoot at the precise time of 11am when the light would be just perfectly above these dividing barrier railings and therefore cast no distracting shadow. ” I had to photograph in harsh sun but since this image was not about the light but more about a visual riddle I was not too worried about the light…”

And yet amazingly, this wonderfully original picture almost never reached a global audience.

He had taken over a thousand pictures here, 3 weekends in a row and was still not satisfied. It was only four months after taking the prize-winning shot, when a friend asked to see some recent work, that he was finally made aware of the fact that he already had the picture in the bag !  ” It made it clear to me that day that obsessing too much can also make your judgment blind…. Eventually I would have got there by myself alone but my obsession over perfection was holding me back. “

What we can learn from Sofia and Stan is that there is a significant difference between just firing off blindly and having an intention in mind or adapting to a scene that develops before one’s eyes.  It is the very nature of shooting on the street, which involves waiting for things to happen, that there is such a high proportion of misfires, compared to other branches of photography where one has greater control. Both these photographers stand out as experienced practitioners of their craft, by viewing their error pictures as markers towards a final goal that has in some ways been pre-visualised. This separates them from those, less-seasoned, who rely too much on the camera to somehow create the picture.

As Sofia also remarks, ” I sometimes delete pictures that were just a mistake, like pressing the shutter when I am not even pointing at the street or are too tilted. Trying to save space. But I generally keep most of the bad pictures, especially when I’m working a scene. They all are learning experiences and they can be sketches of future pictures…” 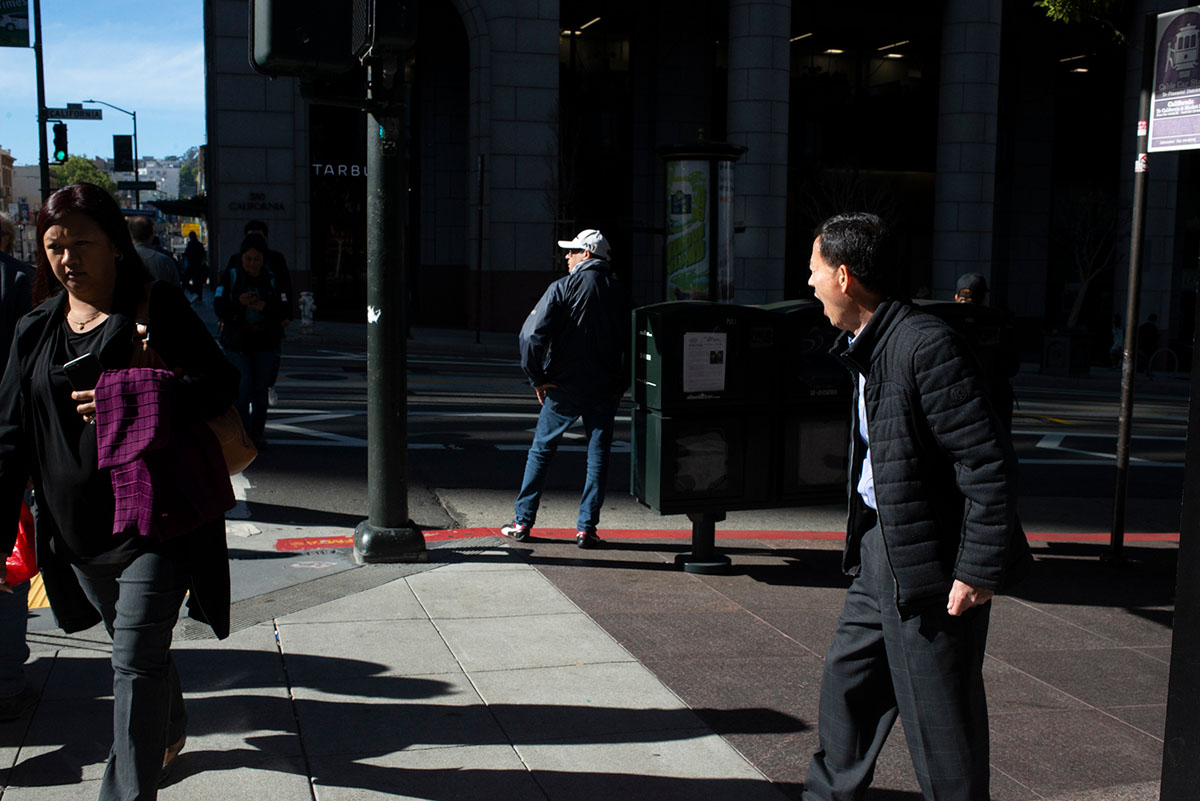 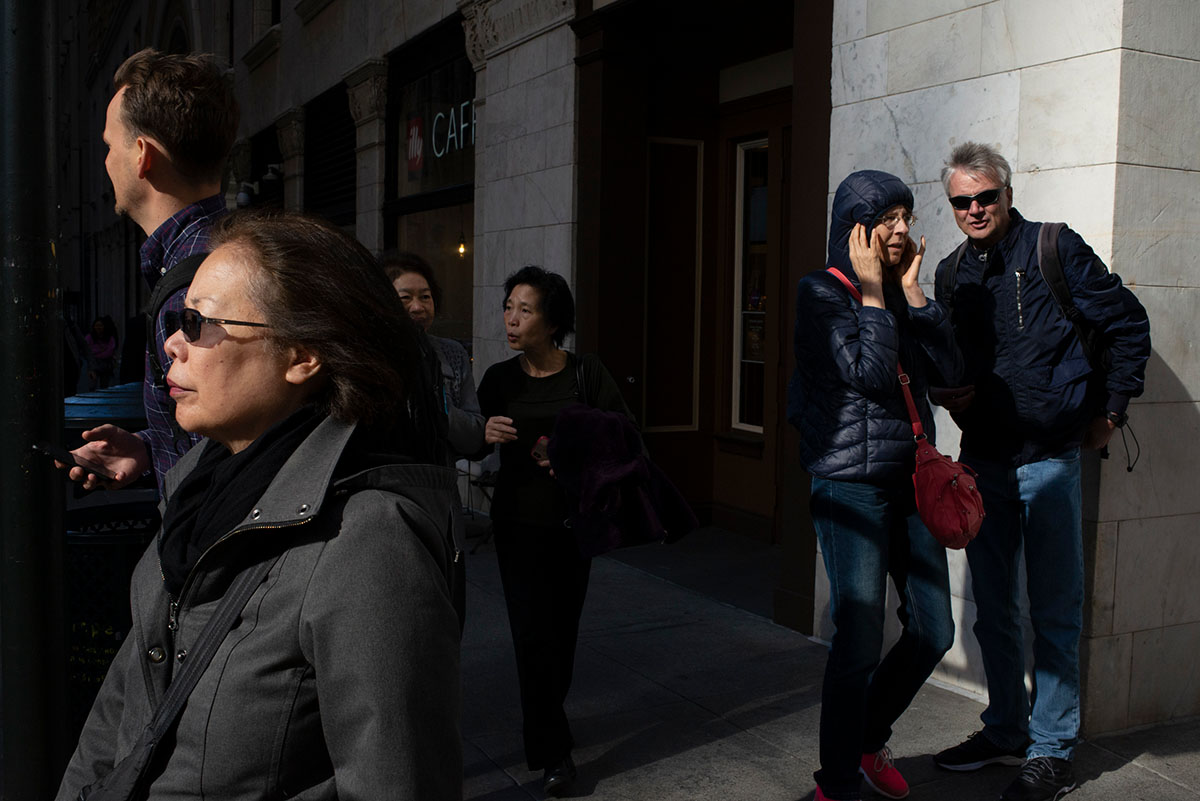 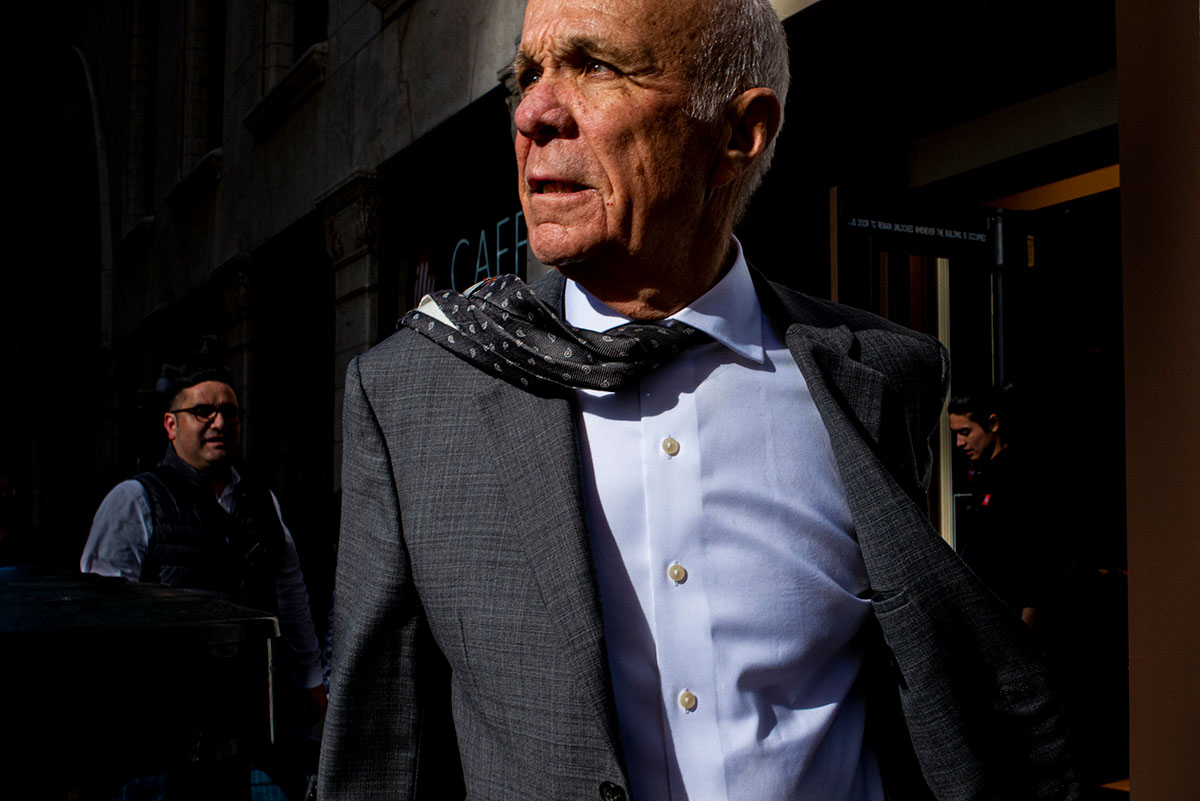 Having said all this about how we can make bad pictures appear good in hindsight, as being pointers on the path to success, there  have also been some concrete cases of famous photographers taking shit pictures. Well, to be diplomatic, let’s refer to these  as sub-standard work. Nobody, for example, would begin to claim that Eggleston’s Spirit of Dunkerque book of fifty images, ranks in any way alongside much of the ground-breaking colour photography he produced in America in the 60’s and 70’s. Maybe the privilege and cash comfort of being invited by the French municipality as artist in residence went to his head a little bit, and he felt he had nothing particular to prove. More significant is the decline of Garry Winogrand in his later years, shooting huge quantities of pictures in a generally directionless and haphazard manner. Skarkowski, who had done so much to champion his work, dismissed most of these images as failures. While Winogrand still had an eye for the moment and an instinctive feel for the drama that played out on the street, his final pictures, which remained for the most part undeveloped at his death, lacked the energy and close up focus that had marked out his special talent.

But then again, so what. These “failings” do not take away from the greatness, and unique visions of an Eggleston or a Winogrand. If anything they just reinforce their human vulnerabilities. We can all have good and bad days at the office. The ups and down of personal lives are felt perhaps more intensely by creative people, thus impacting on the quality of their output.

In today’s Instagram dominated age, where everything is polarised into a world of likes and non-likes, it is worth remembering that no photographer is as consistently good as their best work, nor as bad as their occasional failings.

If my own experience is anything to go by, what I believe I can learn from the great Street Photographers, is the ability to understand and accept my shit photos more readily. Be willing to experiment and fall down, in the knowledge that I’ve been there before and that the very best images are probably just around the corner.