Finding my vision in Rome

Just over two weeks ago, I returned from a 5 day workshop with husband and wife team Alex Webb & Rebecca Norris Webb in Rome, entitled ” Finding Your Vision”, organized by RVM Hub.

Why did I enroll on this Workshop?  The reasons were diverse.

First and foremost, after 25 years as a practising professional photographer, I felt like I’d lost my way a bit and that I needed to re-kindle the spark and energy that had first given me the impulse to see the world through the prism of a lens. Did I still have something valid to express through photography, how could I develop this vision further, was there a way of continuing to earn a living through this ?

Secondly, I’d been following Alex Webb, of Magnum photos since the beginning of my career. His first book “Hot Light/Half-Made Worlds” was one of my first acquisitions, the stunning front cover shot was mesmerizing. He became one of my colour reference points.

And then about 2 years ago, I stumbled across Alex & Rebecca’s aperture book “On Street Photography and the Poetic image“, at London’s Photographer’s Gallery. As a long-time practitioner of Street Photography, I found the semi-educational format of the book intriguing. I read through it while still in the bookshop and immediately bought it. It was simple and accessible, and at the same time quite profound. So many of the pictures and writings resonated with my own convictions about photography.

Thirdly, I’d first visited Rome in the spring of 2015, when I accompanied a group of American university students there for a professional assignment. The city had captivated me, the mix of ancient and modern, the religious and the secular, the light and shade, and I had vowed to come back to pursue my visual explorations.

I arrived in the Italian capital on the afternoon of Saturday 25th March, a few days before the official launch of the Workshop, time to settle in and find my feet. Within an hour of landing I was in the metro and out on the streets; the colours and atmosphere of this Eternal City, bathed in wonderful spring light, was immediately stimulating. 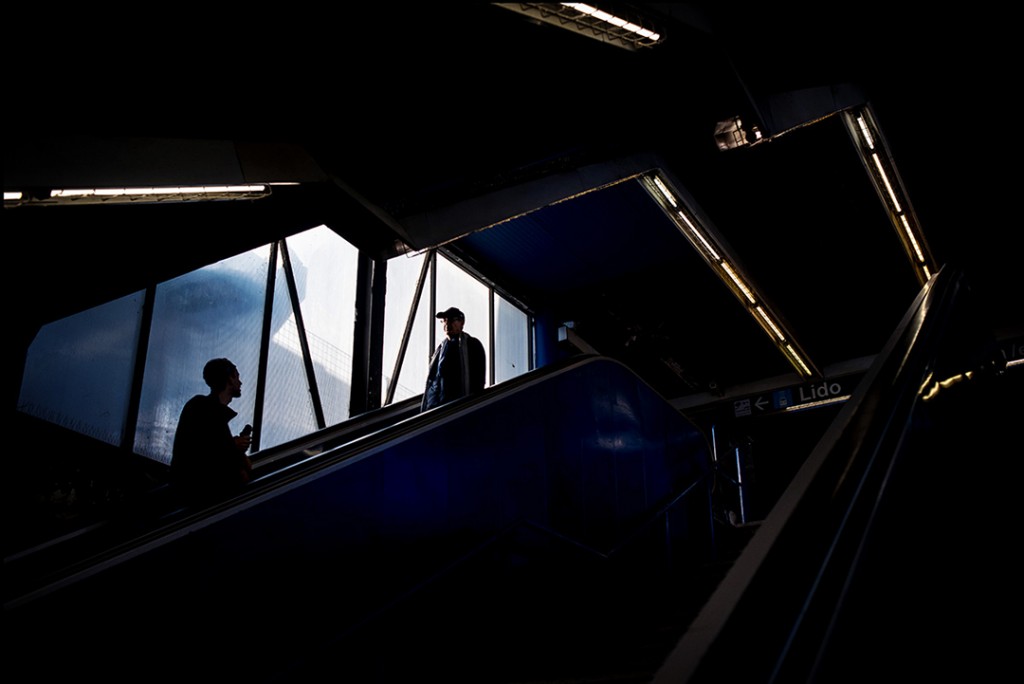 Once the workshop took off in earnest, there was an unconscious pressure to take one’s work to a new level, to try and push the boundaries a bit further. I have always believed that my pictures are quite simple, I tend to concentrate on just one or two elements. In the presence of Alex Webb, the master of visual layers, photographic tension and energy, complex compositions, I felt the urge to get in closer, fill up the frame more. If I could just take one image close to this Webb classic in Haiti ( he himself admits to being quite a fan !) , then I could die and go to photographic heaven a contented man.

I did indeed become bolder and succeeded in shooting almost right under people’s noses without feeling too intrusive, or too wary of their response. Probably my most impressive capture was the shot below of some nuns waiting at a bus stop. The girl in the foreground wearing sunglasses really helps make the picture, giving it more depth. It’s not got the angular, jagged dimension of Webb’s images, but it’s busier and slightly messier than I am accustomed to, so I was happy with the result. 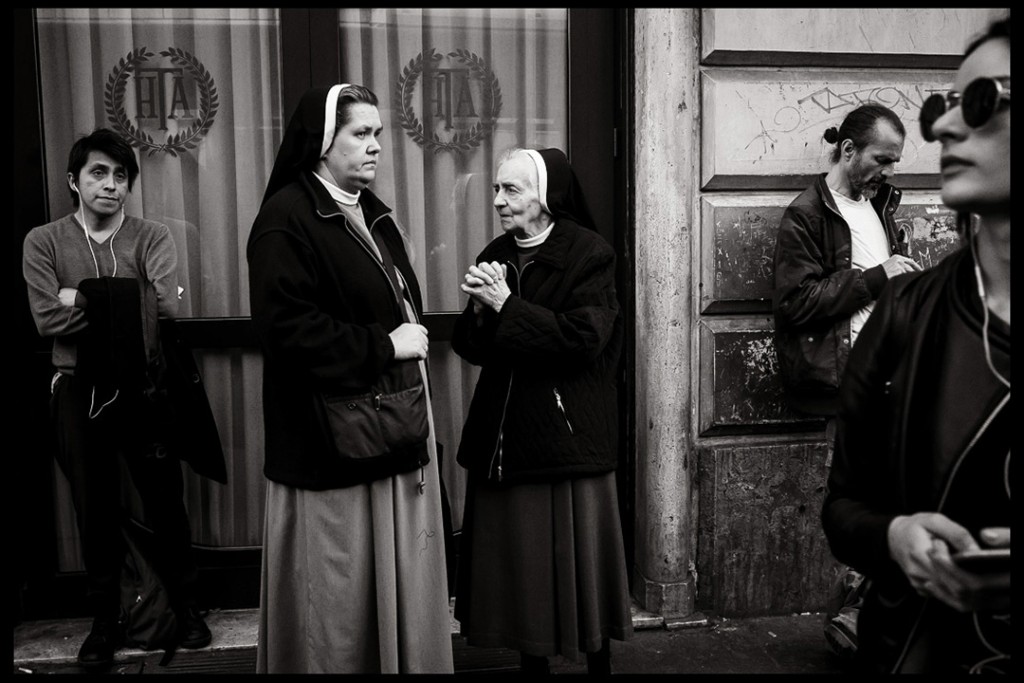 However, this picture is somewhat of an exception. In the end, I found myself returning time and time again to the quieter, more gentle type of image.

Alex and Rebecca, had from the outset (first morning mini-portfolio presentation), been nicely complimentary about my work and had defined my style as being “whimsical”. I had moreover confirmed the significance of Tony Ray-Jones and Elliott Erwitt, among others as my primary photographic influences. So when it came down to the final edit it was this ” vision” that was re-affirmed, a world of bright colours, but soft wit. It would appear I also have a strong propensity for vertical compositions. I think it is my way of interpreting visual space and creating some humour and intrigue in an otherwise banal situation. 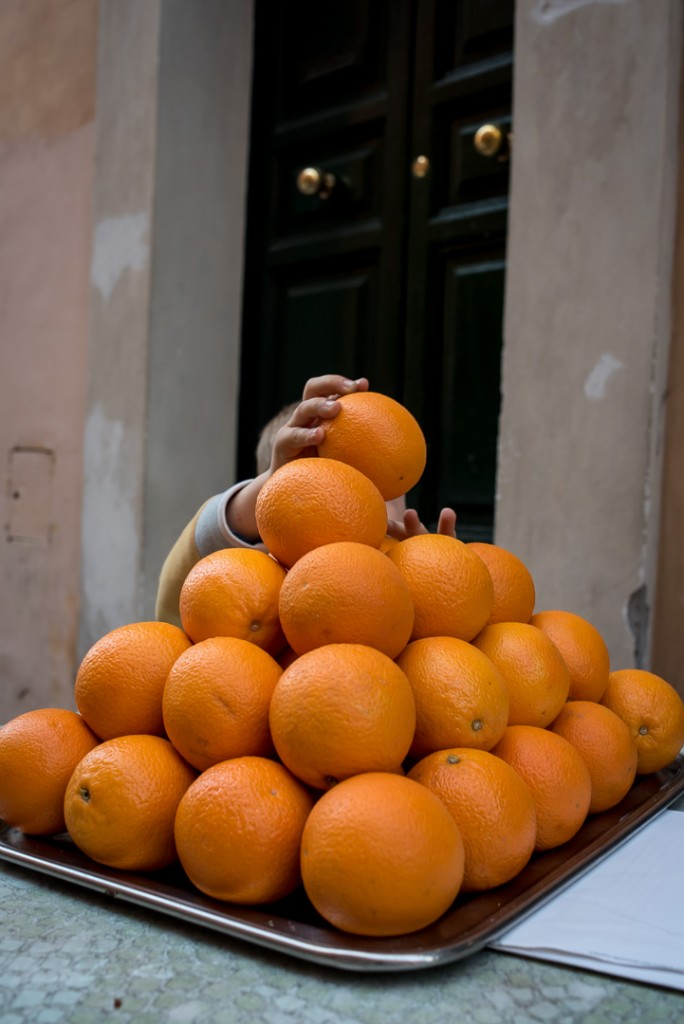 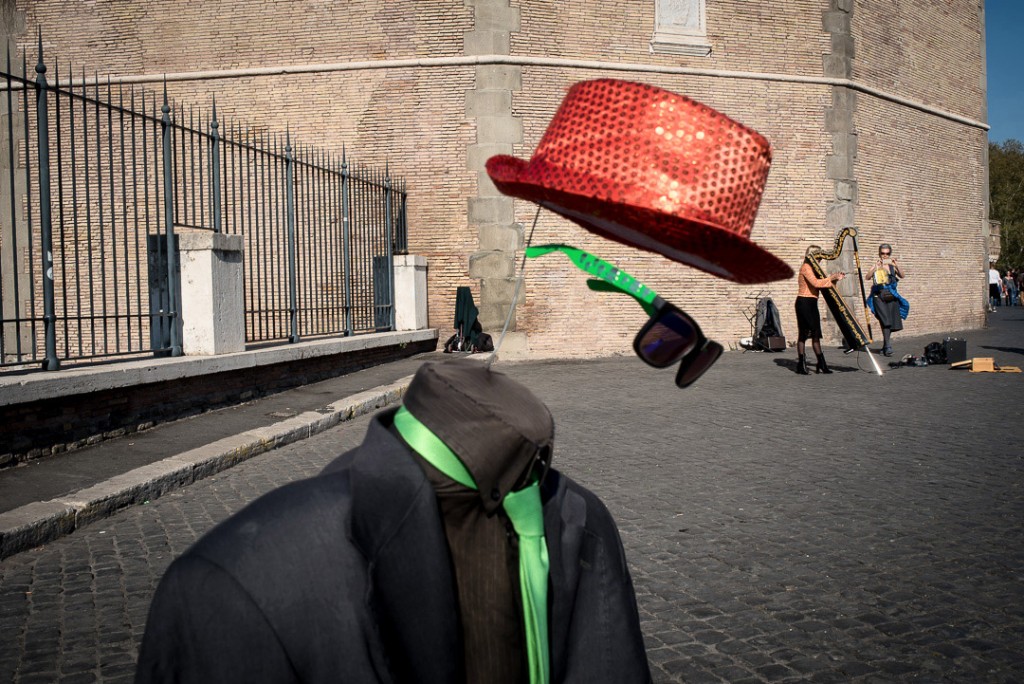 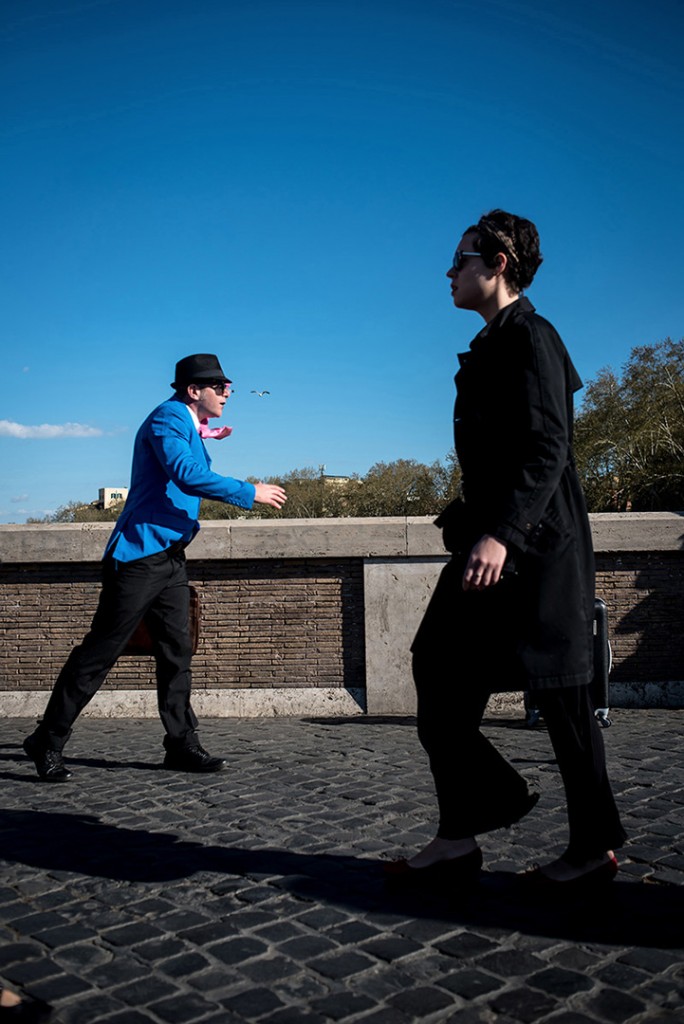 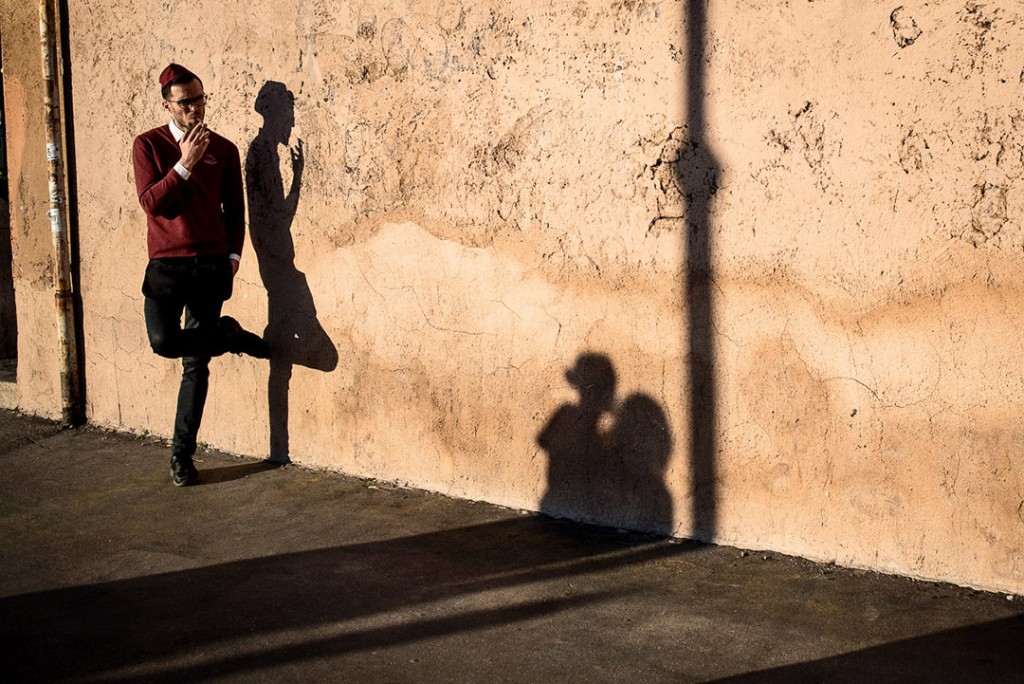 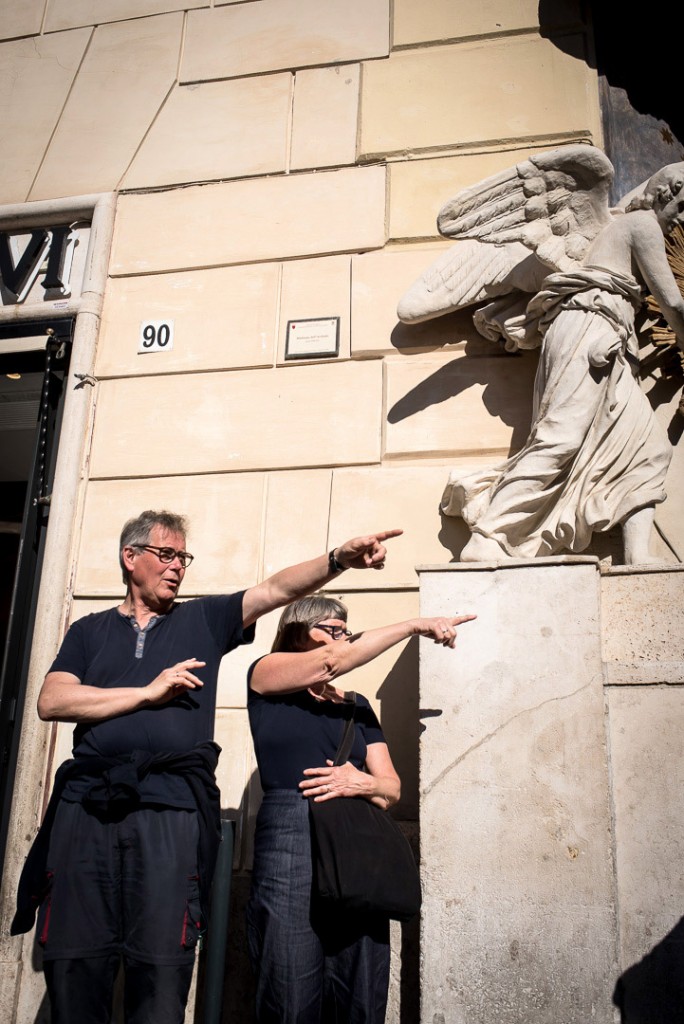 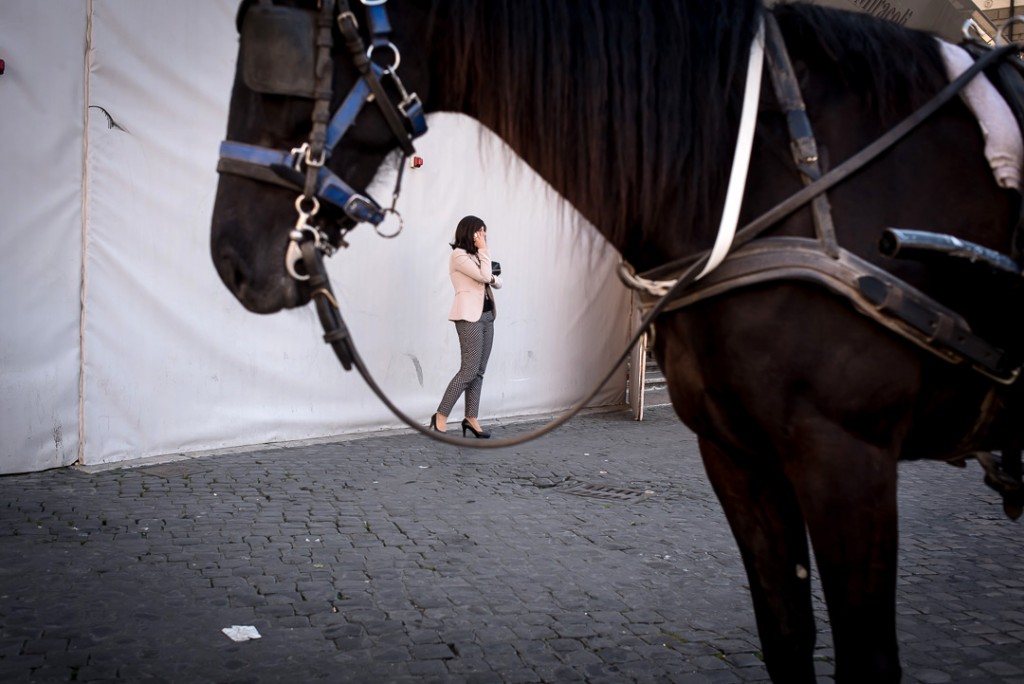 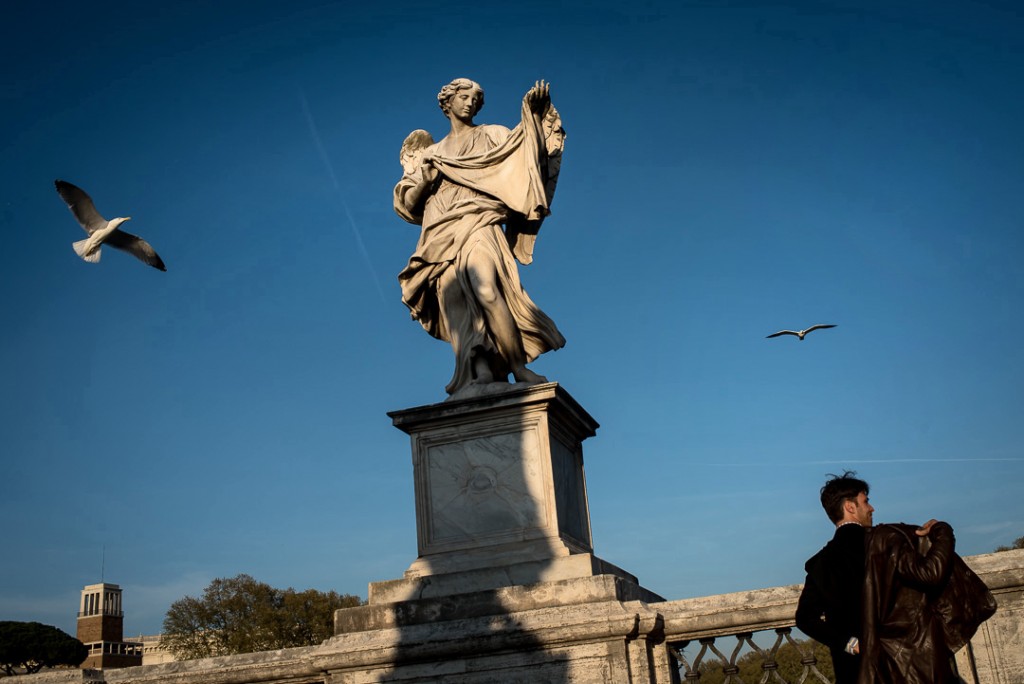 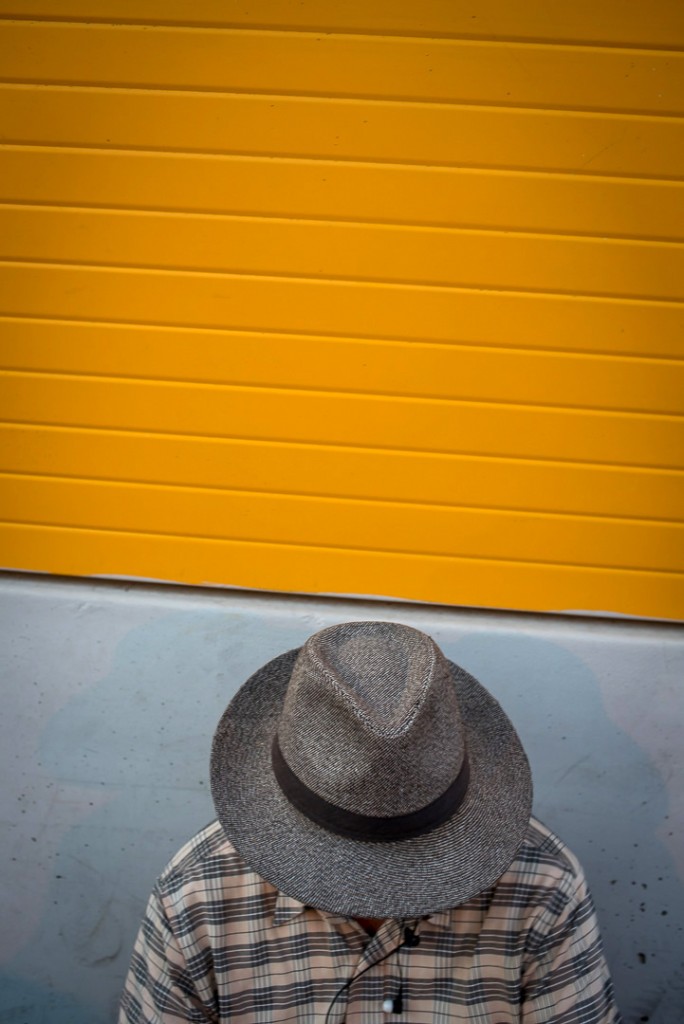 So what did I learn from this workshop?

I learned first of all that there is no substitute when you are engaged in some sort of creative/artistic pursuit, of being completely on your own with no other responsibilities on your mind. The privilege of just taking pictures for a whole week in a stimulating environment was wonderful and allowed me to be a lot more relaxed and less result-driven. Alex and Rebecca are great proponents of an organic/intuitive approach to photography, especially when working the streets. Too many pre-conceived ideas get in the way of meaningful image-creation, you have to be emotionally connected with the moment and be prepared to go with the flow. I definitely believe that my best shots came almost by happy chance, when I was least expecting them. In an almost spiritual sense, I was in a good place mentally to capture the spontaneity and unpredictability of everyday life. On a semi-technical level, I discovered, if I hadn’t properly known it before, that working with one camera (Nikon D750) and one lens (35mm f2) frees the picture-making process up enormously. At the end of the week, one’s photographic vision is perfectly attuned. One anticipates situations a lot faster, see the pictures forming in one’s mind and the camera becomes truly an extension of the eye. 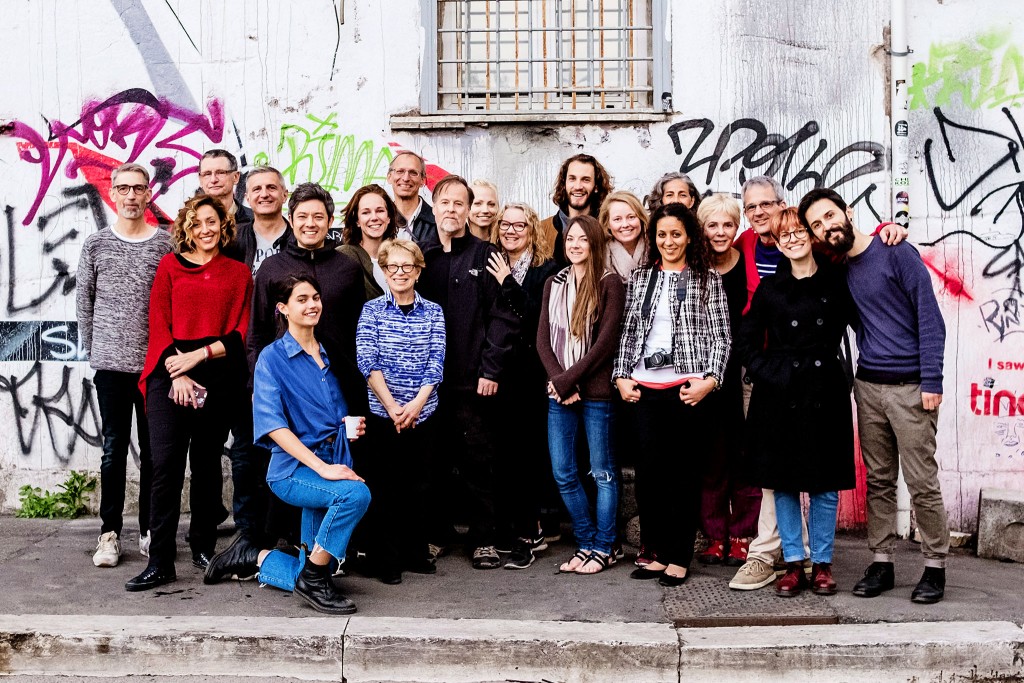 When I first realised we were 17 participants in the workshop, I was somewhat disappointed and believed that, maybe after all, this was just a business-driven exercise and that there would be no personal service. However, Alex and Rebecca’s teaching experience, their overwhelming enthusiasm for so many strands of photography and desire to pass on their knowledge quickly came to the fore. Moreover, the size of the group over the course of the week, became a real positive influence. There was real bonding and feeling of shared experience. In the current digital age where social media dominates, this was a great occasion to make real contacts and connections. The international flavour of the group, with such diversity of ages and backgrounds – an Argentinian model working in Paris, an American ex-musician living in New Delhi, among others- made for real camaraderie, and a noticeable absence of ego. I myself, British born and bred, son of Austrian/German Jewish refugees, now living in France, felt completely at home in this environment. I believe, we photographers, often have this international outlook: we may belong to one place, but we live a little on the outside, as the observer looking in.

I spent a total of 8 days in Rome, which cost me, travel, accommodation, living and photography included, around 2750€. Was it value for money?  I’m not going to answer this as you can’t monetize this sort of once in a lifetime experience. Suffice to say that I have definitely returned  a better photographer, insofar as I have more belief now in my ability and a greater sense of where I am going. Thanks for helping me find my vision, Alex and Rebecca, and hope one day our paths may cross again. 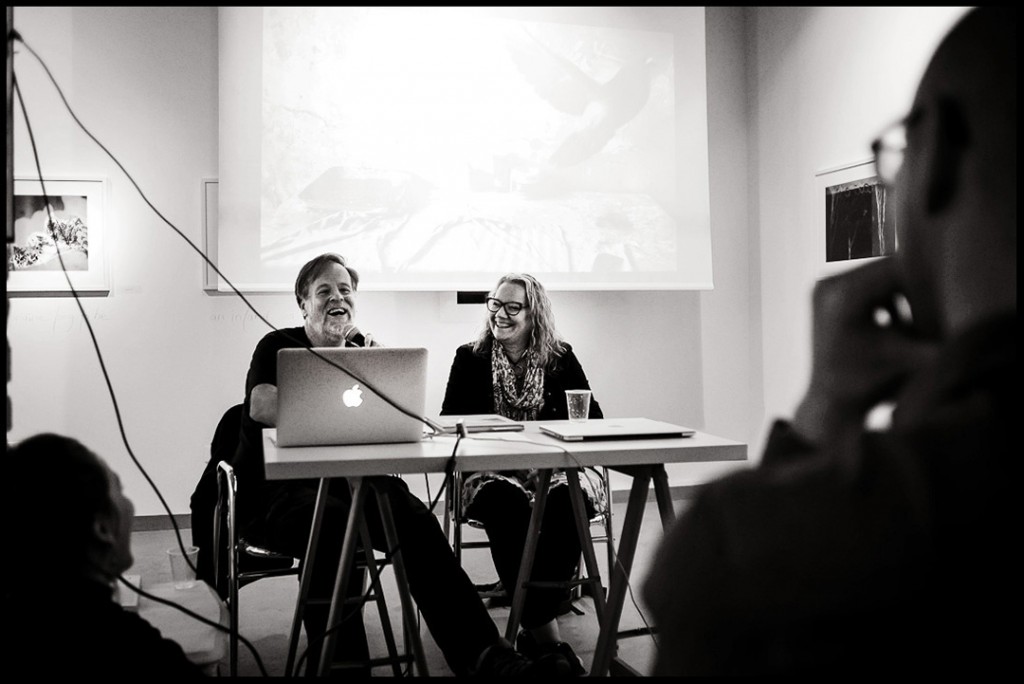